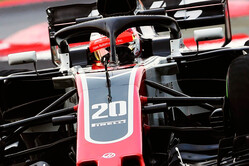 Kevin Magnussen delivered another points-paying performance for Haas F1 Team by finishing a strong sixth in the Spanish Grand Prix Sunday at Circuit de Barcelona - Catalunya. It was a best-of-the-rest result, with only the heavy-hitters of Formula One ahead of him, as Mercedes, Red Bull and Scuderia Ferrari comprised the top-five.

At the other end of the racing spectrum was Magnussen's teammate, Romain Grosjean. An opening-lap spin in turn three of the 4.655-kilometer (2.892-mile), 16-turn track sent Grosjean across the racing line and into the paths of Nico Hulkenberg's Renault and Pierre Gasly's Toro Rosso. All walked away from the accident unharmed, but each saw their race end before it ever really began, as Grosjean was credited with an 18th-place finish.

Magnussen's drive to his third top-10 of the year began from seventh on the grid. It was a relatively straightforward affair, with Magnussen picking up sixth place when Kimi Raikkonen retired his Ferrari after 25 laps.

A scheduled pit stop on lap 32 where Magnussen swapped the Pirelli P Zero Yellow soft tires he started the race with for a new set of White mediums was seamless. Combined with Magnussen's massive advantage over his nearest pursuer, his sixth-place position was secure along with eight valuable championship points.

Despite a Virtual Safety Car period on lap 42 which slowed down the field, Magnussen's gap over seventh place remained stout. He cruised home in sixth place, securing his second-best finish since joining Haas F1 Team in 2017.

Five rounds into the 21-race Formula One schedule, Haas F1 Team is sixth in the constructors' standings with 19 points, 21 points behind fifth-place McLaren and one point ahead of seventh-place Force India.

Romain Grosjean: "There's not much to say. I lost the rear end in turn three and I just spun. If you look at the footage, I had wanted to avoid contact with my teammate. Kevin had a bit of a wobble, I lifted off the throttle, and then the car just went. I'm sorry for the others that were involved - there wasn't much I could do once the car went. Kevin had a good race, which is good for the team. I had wanted a steady race, but that wasn't today."

Kevin Magnussen: "I had a really good start. I was alongside the Red Bulls, but I didn't really want to fight them as I knew they were much faster. My job was to stay in seventh and settle down from there. I was able to defend well, keep out of trouble on the first lap, so I was happy. It's been a strong performance and I think we deserved to get the kind of points we've scored in Bahrain and here. We should be able to score points at every race, and we have had the car to do that, we've just had some mistakes and mishaps that meant we didn't score points regularly. It's good to get some good points on the board. I'm happy we're back more in our deserved position in the constructors' championship, as well. We just need to keep this level up and continue to score regularly."

Guenther Steiner: "A good day, but it could've been better. Romain made up positions at the start, but the car spun around and his race ended early. Kevin did a solid job. There was never a threat for his position. All in all, a good day, and again we showed that we're in the top of the midfield at the moment. We're really looking forward to going to Monte Carlo to get some more points."