Grosjean: A mountain out of a mole... thing 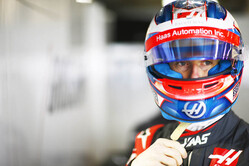 No doubt one of the very reasons he formed part of today's official FIA press conference is because he is currently in the media spotlight - and judging by the shades sported by all four drivers almost literally so - nonetheless, Romain Grosjean was determined to play down speculation over his future.

Yet to open his 2018 points account, and having made very public mistakes that eliminated him from the last two races, earning a three-place grid penalty for this weekend's Monaco Grand Prix after taking out Pierre Gasly and Nico Hulkenberg in Spain, Romain Grosjean is very much a man under media pressure.

In the course of a few short weekends, the Frenchman has undone much of the sterling work he has done since those days when he all too frequently made the headlines for the wrong reasons, not least his near decapitation of Fernando Alonso in Belgium in 2012.

Having sought the help of a sport's psychologist back then - a move he clearly benefitted from - Grosjean appeared determined to keep on top of the situation today when asked about his current bad spell.

"I think you're making a bit bigger a mountain our of a mole... thing, I can't remember the saying," he replied, when asked what he needs to do to end his run of "bad luck".

"Yeah, the last two races didn't go quite to plan," he continued. "It happens that sometimes you go through tough times.

"What happened in Barcelona was just unfortunate that I lost the rear end avoiding a contact with my team-mate and that was it. The performance is there, the car is doing great and the team is doing an amazing job. Yeah, we don't have any points on the board but I'm not too worried.

"I think it's getting better and better," he added. "We've been qualifying, very often, in front of the midfield. It's super tight, so a tenth or two of a second, which doesn't make much different on the first few rows can lose you two or three positions. You need to get it perfect. I think it's getting there; we're working well, and I think it should be quite nice here and hopefully the next updates coming are going to be pretty competitive."

Speaking earlier, team boss Guenther Steiner was determined to end speculation that the Frenchman's future with Haas is in doubt.

"We didn't even speak about it," said the Italian. "When somebody has two bad races there's no point to start rumours, or to start to do things about it. The only thing that we need to do is to get Romain back to where he is capable of competing, which we all know is a very capable guy.

"I'm not a person when if someone's on his knees I try to kick him, that's unfair," he added. "For sure he knows better than all of us what not to do, not to do another Baku and Barcelona. But can it happen again? Yes, it could. It's Monte Carlo. But just to stop the rumours, there was never a talk about that one."

Asked about the penalty, he admitted: "It doesn't help, but we have got it, what can we do about it? We know going in every position you qualify better than you should it's one less you go back, in theory. So it counts. You start already with a penalty, and for sure here it doesn't help, it's the most crucial part of it. You also need to get again going even with a three-place penalty and start hopefully a trend that we go uphill with him."