Verstappen moves on from Austin penalty 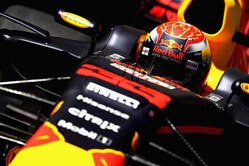 While it was teammate Daniel Ricciardo who was ultimately recognised for move of the year following his stunning overtake of Nico Hulkenberg, Lance Stroll and Felipe Massa in one move at Spa-Francorchamps, it was Max Verstappen who pulled off one of the most controversial passes of the season.

Unfortunately however, the last lap move on Kimi Raikkonen which saw the Red Bull driver claim third, having started the race sixteenth, was subsequently deemed illegal as he had exceeded track limits in his bid to pass the Ferrari.

Even as he waited in the ante-room ahead of the podium celebrations, Verstappen was blissfully unaware that the stewards were still assessing the move, far less that moments later Raikkonen would arrive to take his place on the podium.

"Of course, at first your initial reaction is something like: 'Why? It was a great move'," he says in an interview for his own website. "But when you look at the rules, it was not correct.

"Nothing was by the book that whole weekend," he continues. "Drivers were getting off track without being penalized for it. But you always need to focus on the positives; it was still a nice race and everyone enjoyed the excitement all the way down to the final lap.

"It's always nice to be on the podium, but to finish fourth after having started sixteenth, is still a great result," he insists. "It wasn't as painful as most people thought it was. In the end I made my peace with it.

"As a person, I certainly grew, due to the challenging moments I faced," he says of a difficult season in which he suffered more than his fair share of reliability issues, one particularly bad streak seeing the youngster finish just two races of seven. "In general, it went well and we regrouped ourselves positively. With the issues and drop outs, it was a challenging year, but I learnt from it."

While the Austin move on Raikkonen eventually came to nothing, it was a satisfying manoeuvre at the time for a driver who failed to see any of his passes make it into the top ten of the season.

"This year I actually didn't have that many overtakes," he admits. "With this car you are actually only able to overtake on the straights, which is really not that satisfying compared to last year."

But then there was the head-to-head with Hamilton at Sepang.

"It felt good," he admits, "but honestly, it doesn't matter who I fight with as long as it is for the win. It wasn't a particularly special feeling."