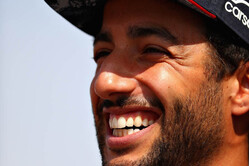 Three DNFs in the final four races of the year saw Daniel Ricciardo slip to fifth in the standings behind Kimi Raikkonen, and almost into the clutches of his teammate Max Verstappen who had suffered his own reliability issues throughout the season.

While fifth isn't too bad, it was down on the previous season when he finished third and scored 56 points more.

Though in 2016 his average qualifying position was 4.19, the popular Australian taking pole in Monaco, this year he slipped to 6.1 his best qualifying performances coming in Italy and Singapore where he put the RB13 third on the grid.

Indeed, it is his Saturday afternoon performances that Ricciardo believes cost him dear.

"I used to be called a Saturday driver, now I feel I'm probably called a Sunday driver... who would have thought?" he told Motorsport.com.

"I'll put it down to a couple of things," he continued. "I wouldn't say I've struggled with the car, but it's been a bit trickier to maximise. There were a lot of laps on Saturdays... I mean I crashed twice in qualifying, which is very uncharacteristic - Australia and Baku - where it was trickier certainly. For whatever reason, Max didn't find it as complicated to start the year. Naturally, I was probably too sensitive to it as well.

"A lot of the time, it was probably better to just say 'f*** it', and just drive it, and deal with the grip I had as opposed to try and fine tune it too much," he admits.

The Australian claims the decision not to over-tweak the car saw a temporary improvement.

"We got to a point where we thought, 'it is what it is, it won't be the perfect car, just deal with it'. So I put together some good ones. Then we got perhaps stuck in our old ways, there were quite a few practices this year, especially Friday FP2, where I was on top.

"In the past, if we were quick in practice, we didn't touch the car, we left it. We felt we had a good thing, so why change it? Then come qualifying, the track would evolve and we would be worse off. So we'd be caught off-guard with maybe what we used to do and what used to work.

"It was a pretty big learning process this year," he admits. "But we know the reasons now. That's why I'm confident next year will be better."