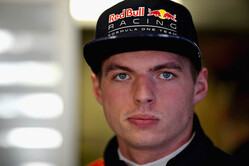 Max Verstappen: "For me that was a pretty boring race, if I had a pillow in the car I could have fallen asleep. I tried to follow Kimi at the start but it's so hard at this track and I couldn't find an opportunity to pass. As soon as you get within 1.5 seconds it is really tough to get close and make a pass. I was surprised at how good my pace was during the race, especially as I have struggled all weekend with the feeling of the car. Once I got caught in the blue flags and I dropped off a bit I was able to see the true pace of the car, and it was actually quite quick. It's a shame we couldn't show it and be able to fight, which also comes as bit of a surprise at this track. In all, it's been a positive end to the year. In the last two races we didn't maximise our performance but they are not strong tracks for us so we expected that. We will keep working hard to improve as we have done over the latter stages of this season and with some improvement from the engine side we should at least be close to the top guys next year."

Daniel Ricciardo: "Not a good race day for me unfortunately. At Turn 19 I felt something strange with the steering so I thought I had a flat tyre. Then just before the pit lane I said: ‘I'm coming in'. We weren't supposed to pit but I feared it was a puncture. Then when we got back out the steering was still strange and it suddenly got very heavy so I could tell that I was losing hydraulic pressure. I lost the power steering and then we couldn't change gears and that was that. I'm now excited to go on holiday, really looking forward to the break and hopefully next year we'll come back stronger. Not a good last few races for me unfortunately. We had some highs this year and a lot of positive moments but it's not the nicest way to end the season, with a DNF."

Christian Horner, Team Principal: "After holding positions at the start Daniel was able to stay close to Sebastian, and likewise Max with Kimi. Max had a go at an undercut with Kimi on lap 15. Despite his fastest stop of the year it wasn't quite enough to get Max ahead of Kimi. Then shortly after that Daniel reported a strange feeling in the steering in Turn 19 which was probably the start of his issues. He pitted immediately and the boys did a great job to scramble in time to get him turned around without losing a position, but then what looks like a suspected hydraulic problem caused his retirement. Max continued to push Kimi throughout the grand prix but unfortunately on this circuit was unable to mount a challenge, finishing in fifth. It's been a season of highs and lows for us, we would obviously have liked to have finished on a higher note but, looking back, the positives we take out of the year are the three race victories and the 13 podiums for the RB13 and, of course, an awful lot of lessons with too many retirements. 2018 starts for the team tomorrow with the Test commencing the day after."