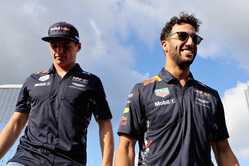 Asked what influence teammate Daniel Ricciardo has had on him, Max Verstappen's reply was quicker than Valtteri Bottas' start to the Austrian Grand Prix.

"He keeps farting," he continued, "it smells so bad in our hospitality all the time...

"He's a great guy," he added, the assembled media having fallen eerily silent, "on track we always try to beat each other, but off track we can have a great laugh.

"We respect each other, and to be honest I've never really experienced something like that in racing, to have such a good teammate, to really have fun with.

"I hope we can be teammates for a long time."

Asked if that relationship can endure a battle for the title in 2018, the Red Bull driver said: "I think so because we respect each other. When you are fighting for a world championship you will have a bit more tension on the track but at the end of the day you always come back to where you respect each other... you have to accept if one guy is faster than the other, that's what we can do. Also when somebody has a good race, we can say 'well done' and 'you deserved that', I think that really important."