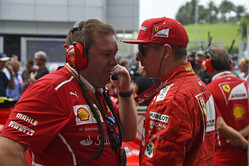 While Sebastian Vettel's sterling drive to fourth went some way to limiting the damage, the fact is that had the two scarlet Ferraris started form the front of the grid yesterday it is entirely possible that the Maranello outfit could have scored a 1-2, thereby closing the gap in both championships.

But for Vettel to have to start from the back of the grid after suffering a cracked manifold in qualifying, and teammate Kimi Raikkonen not to even start the race due to a similar issue, is seen by the Italian team, the Italian media, the Tifosi and company president Sergio Marchionne as a disaster, especially, coming as it does two weeks after the nightmare of Singapore.

"Yesterday both Ferraris could have won the race," he said.

"That's a fact," he insisted. "And it could have also been the same at Singapore... that's another fact.

"It's also a fact that we've got some issues with our power units because the quality of the components is not at the right level for a race car.

"Having this kind of problem during the race make us angry," he admitted. "It's not a big problem if this kind of issue appears in our factory, but it's really ugly when you're in second place on the grid and you cannot start the race."