No further action re Stroll/Vettel incident 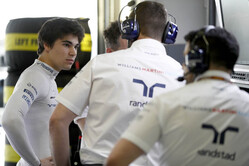 The Sepang stewards have deemed that no further action is warranted following the post-race incident involving Sebastian Vettel and Lance Stroll today.

While attention was focussed on race winner Max Verstappen, the cameras cut away to fourth placed Vettel who had stopped on track with his left-rear wheel pointing at the sky from the top of his engine cover.

Subsequent replays showed the Ferrari colliding with Lance Stroll as the two completed their slow down laps at the end of the race as the Williams driver sought out rubber pick-up from the side of the track.

"Is that possible?" said a stunned Vettel. "Stroll is not looking where he is going! He completely shunted into my car."

"Vettel just ran right into the side of me," reported Stroll to his team.

However, a post-race investigation by the stewards deemed that no furrher action was required.

"On the approach to Turn 5 during the slow down lap after the end of the race, Car 18 (Stroll) was towards the middle of the track, Car 8 (Grosjean) was closing from behind on the inside and at the same time, Car 5 (Vettel) overtook Car 18 on the outside and in doing so, turned in slightly towards the apex of Turn 5," they said.

"Simultaneously Car 18 was moving slight away from the apex. This resulted in contact between the left rear tyre of Car 5 and the right front tyre of Car 18.

"The Stewards consider that no driver was wholly or predominantly to blame for the incident and will therefore take no further action. The Stewards also consider that even though the race has ended, caution still needs to be exercised by all drivers on the slow down lap."

While he might have escaped punishment for the incident, Vettel now has to wait and see if his gearbox was damaged in the incident, if so it will mean the German taking a grid penalty in Japan next week.