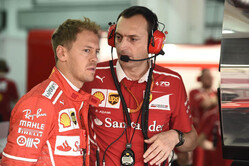 On a day in which Kimi showed the potential of Scuderia Ferrari by taking P2 on the grid after a hard-fought battle, Seb was unable to set a time due to a problem which prevented the compressor from feeding air to the engine properly. A new V6 engine had been fitted to his SF70 after P3 for precautionary reasons, and the engine came complete with parts which had been run before and were factory-proven. Nevertheless, the Team is determined to fight to the end.

Sebastian Vettel: "Straight away I understood there was something wrong. Today we had decided to change the engine after P3, then I went out and everything seemed to work, but during the flying lap in turn 5, I suddenly felt like I was losing power. I was lucky to limp back to the garage so that we could have a look. Unfortunately, we couldn't fix the problem. We tried to find the issue when we took the engine cover off, but we couldn't find anything wrong. So, we decided to fire it up and see if we could drive again. As soon as the engine was running, we could see the issue was still there. It's a shame because the car is quick, but tomorrow we should be able to fight back. I don't have expectations in terms of numbers, but anything can happen and that's why we race. I want to be sure we can achieve our best. We need to know why we got the issue today and make sure it won't happen again. This kind of thing can happen in our sport, but the race is tomorrow. We need to be positive."

Kimi Raikkonen: "Our car has been handling well all weekend. Today in qualifying we got close, but we would have needed a fractionally faster lap time. I think that the car had it, but you can always lose a little bit here and there. It's disappointing not to be first, but tomorrow is going to be a long race for both cars and tires. I have the feeling that we have a good car and a very good chance for the race. If it's going to be dry we are probably more confident, but our car has been good in both conditions and with all fuel loads. What happened to Seb is disappointing, very unfortunate for him and for the team. The guys did an excellent job to change all the parts getting the car back in one piece and ready to go, but then unfortunately he had to stop. Tomorrow is another day, he will have good speed and I'm sure that he can recover well."