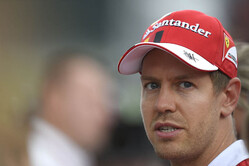 Race stewards in Singapore have declared that no further action needs be taken following the first lap crash in today's Grand Prix which saw Sebastian Vettel, Kimi Raikkonen and Max Verstappen eliminated just seconds into the race, and which may have decided the outcome of the 2017 title fight.

The Ferraris appeared to carry out a pincer movement on Verstappen heading towards the first corner, with Raikkonen hitting the Red Bull and then his Ferrari teammate.

The Finn and Dutch driver clashed again in the first corner, by now both passengers in their cars, and taking out a hapless Fernando Alonso in the process.

Meanwhile, Vettel, who had been hit at the side and rear by his teammate was to spin on fluids deposited on the track from his own car, many observers claiming that it was the four-time world championship who instigated the entire incident.

However, after viewing the relevant video evidence and spoken to all concerned, the stewards deemed that no further action was necessary.

"Driver of Car 7 (Raikkonen) had a very good start and was able to attempt overtaking on Car 33 (Verstappen) on the left hand side," the said in a statement.

"At the same time, Car 5 (Vettel), which had a slower start, moved to the left hand side of the track; Car 33 and Car 7 then collided resulting in a chain collision with Car 5 and, ultimately, Car 14 (Alonso) at the next turn.

"The Stewards consider that no driver was found to have been wholly or predominantly to blame for the incident and will therefore take no further action."