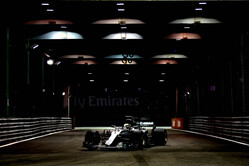 The back cover of the 1993 Belgian Grand Prix race programme showed Ayrton Senna sitting in his McLaren-Ford, his eyes closed and hands together as if in prayer.

"Please, let it rain," were the words across the top of the advert which was for Marlboro.

Their prayers - unlike Senna's - may well have been answered.

A number of heavy storms, ok, let's say 'of biblical proportions', have lashed the circuit today and it is almost certain that even if there are no further downpours the opening phase of the race will still be compromised.

That said, in the nine previous visits to Singapore F1 hasn't had so much as a wet session far less a wet race, so there is a chance that Mercedes prayers may have been in vain.

Then again, perhaps Ferrari headed off to mass and called on the powers that be to give it a break after the misery of Monza.

Assuming it's business as usual and normal conditions prevail, today represents a major opportunity for Ferrari to score a much needed win over Mercedes and for Sebastian Vettel to retake the title lead.

However, ignoring the threat from the Red Bull duo, this will require strong starts from both Ferrari drivers and Kimi Raikkonen keeping the Silver Arrows at bay. Never before, has the Finn had such an opportunity to show his team spirit than he will today by riding shotgun for his teammate.

Vettel's pole-grabbing lap was breath-taking and clearly took a lot out of the German. However, he will have to dig deep again today if he is to hold off a pair of Bulls who are positively ravenous for victory and have the means of achieving their goal.

Having set the pace in every practice session, the Bulls had every right to assume pole would be theirs also, but the brilliance of Vettel, turning the Ferrari power unit up to 11 and sterling work in the sim back at Maranello meant the apple cart was well and truly upset.

Consequently, Vettel will have his hands full today.

As if all this wasn't enough, behind the Prancing Horses, Bulls and Silver Arrows, we have Nico Hulkenberg who has a revived McLaren duo hard on his heels, the Woking outfit looking good for its second double points finish of the season.

Much has been made of how tight the midfield is this season, and never has that become more apparent than this weekend, with the Pink Panthers, Toro Rossos and Renaults set for battle on a day when Williams could find its fifth place in the standings very much under threat.

Like Haas, Williams has had a difficult weekend, and Monza, where both drivers finished in the points, must seem a lifetime ago.

On the other hand, there's the two-stop option, with an opening 13-lap stint on ultrasofts, then two 24-laps stints on supersofts.

The pitlane opens and the cars begin to head out as Safety Car driver Bernd Maylander confirms that though the track was damp it is now completely dry.

No sooner have the words left the German's lips than very large drops of rain begin to fall. 15 minutes until start time... and moments later, Race Control confirms there is a 100% chance of rain.

The field heads off on the warm-up laps, smoke billowing from one of the Toro Rossos. There are no signs of standing water, nonetheless, the cars leave a wall of spray behind them. "It's difficult to see," admits Raikkonen.

They're away and within moments it's carnage. Both Ferraris make great starts, as does Verstappen. However, the Red Bull is the meat in the sandwich and as we've seen before three into two rarely works. Vettel moves to the right and clouts Verstappen with Raikkonen, coming in from the left, also hitting the Red Bull but with far more force. The Finn loses the rear of his car and slams into the rear of his teammate.

The damage to Raikkonen and Verstappen's cars following the initial incident leaves them passengers, and as they career off into T1 they collide again, the Ferrari T-boning the Dutchman who in the melee spears the McLaren of Alonso sending the Spaniard spinning through the air.

Meanwhile, Vettel has spun, the German appearing to have lost it on fluid leaking from his own car following that clash with Raikkonen. He reverses, and finally turns around at which point the damage to his car is obvious and terminal

"I got damage, I got damage," warns Verstappen, just before he is clouted again. "What the **** did they do? Ridiculous!" says Raikkonen.

"I spun, and lost the car," says Vettel. "I think I have damage, sorry guys, sorry. I'm really sorry."

The Safety Car is deployed.

As the stewards announce they are investigating the incident, Hamilton leads from Ricciardo, Hulkenberg, Perez, Bottas, Palmer, Vandoorne, Ocon, Sainz and Magnussen. At the end of lap 1, the Safety Car leads the field through the pitlane.

Weather or no weather, Hamilton's payers have been answered, not only is he leading, his title rival is out.

Alonso, who clearly suffered damage in that first corner incident, is still running.

As Hamilton is warned that he merely needs to get the car home, the stewards announce that the Vettel, Verstappen and Raikkonen incident will be investigated after the race.

The Safety Car pulls off at the end of lap 4,

At the re-start, Palmer catches Bottas napping to take 5th from the Mercedes driver. Both Renaults in the top five.

"VER took Kimi out and then he went to Seb," tweets Ferrari.

Bottas is now under attack from Vandoorne, the Finn clearly struggling.

Sainz is off at T2 but continues, as it is claimed that it has stopped raining in the pitlane.