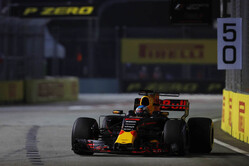 The fastest-ever laps of the Marina Bay circuit were run today, with Red Bull's Daniel Ricciardo smashing the previous all-time record of 1m42.584s by more than two and a half seconds. This was thanks to a time of 1m40.852s on the P Zero Purple ultrasoft in FP2: 3.3 seconds faster than last year's best FP2 time.

The ultrasoft compound has proved to be around a second faster than the supersoft so far, with a high degree of track evolution during FP1 after some mid-morning rain. Conditions for both sessions remained dry though with high humidity: typical of Singapore's tricky and bumpy asphalt, with all three compounds used today.

Mario Isola: "We've seen a very big increase in speed compared to last year, with the lap record already broken in FP1 and the fastest FP2 time more than three seconds quicker than last year's equivalent. In many ways, this isn't much of a surprise as the 2017 tyres and regulations enhance cornering speeds specifically, and at 23 corners Marina Bay has more corners than any other track. There's a gap of around a second between the supersoft and ultrasoft so far; it's a bit harder to assess the soft as there was less running on it today. However, if its pace is close enough to the supersoft, it could certainly come into play as a potential race tyre on Sunday."