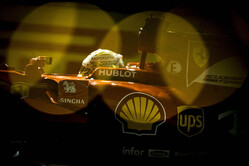 Ferrari driver Sebastian Vettel claimed pole position under the lights of Singapore on the P Zero Purple ultrasoft tyre, which was used by all the drivers from start to finish of qualifying.

Vettel's time of 1m39.491s - 3.1 seconds faster than last year's pole - is the quickest lap ever seen at the Marina Bay circuit, with the 2016 pole time already beaten in Q1. Track temperature was around 34 degrees centigrade during qualifying.

There was high track evolution during Q1 in particular; also because of some oil dropped from a previous support race. Tyre wear and degradation as measured during FP2 yesterday remained quite low even on the ultrasoft tyre, opening up the possibility of a one-stop strategy tomorrow even if tyre degradation should increase.

Mario Isola: "The track got progressively faster quite quickly, once the oil on the track had cleared. This allowed an incredibly fast and closely-fought qualifying session, with plenty of drivers beating the previous all-time record at Singapore. On a circuit which favours the mechanical grip like this one, the wider 2017 tyres offered an important contribution to this result. As tyre wear and degradation is low on all three compounds, one-stop should be the favoured strategy; however, with a 100% safety car record in Singapore and unpredictable track conditions, teams will need to remain versatile and adapt their strategies to the circumstances of the race."