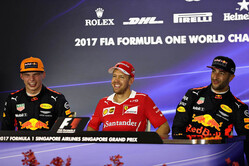 Sebastian, the crowd went crazy, the noise was huge when you crossed the line, and deservedly so. That lap was absolutely massive. You struggled yesterday, where did you find that time?

Sebastian Vettel: Oh, I don't know. I struggled also this morning, or this afternoon. I shouted probably as loud as them, it was unbelievable. I'm still full of adrenalin, so maybe whatever I say doesn't make any sense but, yeah, I love this track. The car was tricky but it came alive and it was getting better and better and better as the night progressed, so really happy we got it done.

And these guys have been so quick, and there is no margin for error around this circuit. To take those kind of risks, to push... there's a little bit down there, that's how close you pushed, all the way to the edge and a little bit over it as well. In terms of laps you have set for pole position where does this one sit, because I can see you are shaking a little bit?
SV:: I don't know, I think I need to calm down first. But for now, very, very happy. The car was amazing and it's an amazing track if you feel that the car is coming alove and you can do what you want to. I knew we had it in us; it was a bit of a struggle to get there, but now I'm just happy.

Huge. Many congratulations. Max, wow, it was going to take something special to beat you today and that was a special lap. But the pace you've shown all weekend, this has got to be promising for you?
Max Verstappen: Yeah, it is. Just a shame we couldn't put it on pole, I think the final lap was not great. But we were quite close and I'm pretty happy with that.

We've seen how hard Sebastian has had to push this weekend to beat you guys this weekend. It's not the first time he's done it. Are you hoping for more of that from him tomorrow?
MV: Hopefully for him, not. We'll see. During the race it will be difficult to pass him so we will have to see in the first lap.

Awesome. Daniel, are you asking the man how he got that lap out of the car?
Daniel Ricciardo: Yeah, I'm a little envious today. I will accept a little bit of defeat but I'm still confident we'll get victory. I think we've got a good package. Seb turned it on in qualifying but I'm looking forward to tomorrow.

So better race pace then them tomorrow?
DR: Yes.

Now Max... Daniel come down. Now last time you started alongside each other, back in Hungary, there was a little bit of a ding-dong between you on the first lap. There's going to be none of that tomorrow. Christian isn't going to be tapping his foot is he?
DR: What happened?

Is it all forgotten then?
MV: I mean that race happened. Now we've got Singapore. We've got great starting positions, so we don't think about that.

Good stuff, thanks guys. Seb, have managed to calm the shakes down a little bit. Lewis is starting back on the third row of the grid tomorrow. How much do you need this win in the championship fight?
SV:: I don't know. I'm happy that we got the car where it deserved to be and we take it from there. Tomorrow is a long race; these guys are very, very quick. We had a difficult night yesterday, a better night today and I'm sure the car will be like today, tomorrow but I'm sure it will be a very close race.

Well, many congratulations Sebastian, your fourth pole in Singapore - bit of a specialist around this place - and your 49th career pole, just one short of the magic 50. But a really open session, one of the most open sessions for a while. And one can just sense in the way you came over the radio at the end, not only a great effort but also a great emotion. Tell us the feeling?
SV:: Yeah, it's a long lap. There are a lot of corner - a lot of things to get right, and equally a lot of things you can get wrong. No, I'm really happy. Obviously the weekend so far has been a bit up and down for us. Yesterday was difficult. This afternoon was difficult. Tonight the car really came alive and it was just getting better. These guys were extremely quick. Q1, I didn't know how the hell I was going to find a second and a half. But then, by Q2, the car was like a switch, from off to on - much better. I knew that the track would ramp up but probably I didn't expect it that much. But, yeah, at the end, Q3 I was very happy with both my laps. A bit lucky in my final lap, because I brushed the wall quite severely out of 19. It was not just a little brush; it was actually a hit. I thought, "OK, I have to keep going". It was fine until I approached the last corner; I had huge vibration. Thankfully there was only one corner left but I really pushed as hard as I could. I knew in the final run that even if I had the upper hand going in, these guys... the track would come up, these guys would have something in their pocket, so I needed to get it absolutely right. I was very relieved when I crossed the line. I looked at the screens behind and I waited for the call. I knew that Daniel was behind me so... I was very, very happy obviously. I think right now I'm starting to cool off.

While you're doing that analytically, that's the bit you can control. The bit you can't control is where your championship rival is - Lewis Hamilton. He's not only got these two cars between you and him, you've also got your team-mate as well. Just purely looking at the race, you must be pretty pleased about that?
SV:: Yeah, I mean, we have a long race and a lot of things can happen. Certainly grid position is king or crucial, but still it's a long race. The fact that our car was good this evening I think is promising for tomorrow. Yesterday we had a scrappy car, I lost the car, I had damage, so the runs after that were compromised. But the feeling was there. I knew that the car has got it, we just needed to get it out and that's what we did tonight. I'm confident for tomorrow. For the others? Max is next to me, so first of all I guess I'm racing him and then Daniel and so on and so forth, so not too bothered where other people are. I think there is a long race ahead and there are a lot of things we need to get right, so we should focus on ourselves.

Q: Max, almost, almost that first pole, almost the first ever teenage Formula One polesitter. This place is all about ramping it up, as Sebastian's just said, tell us why you couldn't find that step in the final run in Q3.
MV: I think I did - just not as much as Sebastian but all in all I think the weekend was a good progression, getting better and better. And qualifying also was constant improvement. Even though the whole weekend we're a bit down on power. I don't know why, we couldn't really solve it. Lost a bit of top speed there. It's not idea but at the end of the day, to be second here, on this track, I think is very promising. We are not too far off so I can be quite happy with this qualifying.

Q: Daniel, we could tell by one of the radio messages partway through the quali, you couldn't quite live with these two in the final part of qualifying. There's clearly some disappointment there but you told us yesterday that you think you can win this race. You're the man who takes his opportunities on a Sunday, do you still believe in it?
DR: Yeah, I still believe so. Today I'll accept a little bit of defeat but there's still a lot to play for tomorrow. For sure I would love to be in Sebastian's position today. I thought pole would be on but yeah, we couldn't quite run with him in that last qualifying. It's a long lap, you gain a bit, you lose a bit, you kind of say ‘I could have got more there' but I think the gap was, in the end - three or four tenths - was quite significant. So yeah, look at what we can do tomorrow. I think it's really on the cusp of one and two stops, so it's going to make it exciting. You might have to carry us out of the cars tomorrow but I'm sure I'll have a very strong race and get, yeah, get some big points.

Q: (Christian Menath - Motorsport-Magazin.com) Question for all three of you. How much would you say your car is developing during qualifying session - just in terms of power output. Do you have something for Q3 special in the engine or is there nothing coming once you're in the qualifying.
SV:: Well I think it's normal that you start off a bit more conservative and then ramp it up. If you look at the importance of the session Q1 is the least important - I mean it's very important to get through but least important to set a really, really competitive lap time. Q2 you need to make it to the top ten, obviously I think the quick teams have the luxury that they have a very quick car and it's not a big secret we run a bit more conservative in the beginning and then gradually progress so that by Q3 obviously yeah, we ask for maximum power.

Is the same true for the Renault engine, Max?
MV: Maybe not as much. A little bit. Fine tuning. We know that we have to still work hard to improve, so it's still not, of course, where Ferrari or Mercedes is.

And Daniel?
DR: No further comments. I mean, once qualifying starts we pretty much put it all in, so yeah, no secrets for Q3.