A farce from start to finish 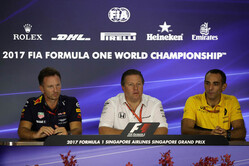 While not up there with the infamous press conference in Canada all those years ago (2003) that saw Ron Dennis and Paul Stoddart go head to head, what yesterday's press conference lacked in drama it more than made up for in entertainment; certainly if you enjoy bad acting and seeing people caught in the headlights or attempting to wriggle out of an awkward situation.

First we had Honda explaining why it didn't work out with McLaren - arguably the most successful British F1 team in history - but would work out with Toro Rosso, a team that has enjoyed one Grand Prix win in countless years of trying.

While the Honda honchos tried (none too) desperately to convince, Franz Tost, appeared to be sinking, turtle-like, further and further into the collar of his team jacket, seemingly hoping that he might disappear.

When attention (finally) turned to the Austrian, he gave a similarly unconvincing performance, not too difficult really when you have to assure a watching world that you are not only targeting a top three finish in the team standings but that Sean Gelael could be the man to help achieve it. There were times, as he spoke, that one fully expected his nose to begin growing a la Pinocchio.

Then we came to the farce that was Part 2, Zak Brown using the press conference for an Oscar-style roll call as he thanked all but his parents for the time with Honda, before assuring us that sponsors would already be lining up at the gates of the MTC following the switch to Renault.

Then then came the piece de resistance, Christian Horner and Cyril Abiteboul assuming the most pathetic poker faces in history as they tried to dismiss claims that the Austrian team will not be using Renault power in 2019 because the French manufacturer has pulled the plug.

The whole thing, while at times excruciating, was entertaining, and if nothing else demonstrated that team bosses are as bigger liars as politicians and inevitably use the same tricks of the trade.

Indeed, all that was missing was Christian to produce Geri - formerly Ginger - to assure the world that she was standing by her man during this time of engine - and possible driver - crisis.

A clever ploy by Honda's Masashi Yamamoto and Katsuhide Moriyama saw the pair 'talk' through an interpreter. If nothing else this allowed both a certain amount of breathing space as they prepared their increasingly unconvincing answers.

Note to team bosses; constantly using words like 'tradition', 'history', 'passion' and 'DNA' only work so many times, especially when those that enjoy Bullshit Bingo still have a record of the McLaren announcement in May 2013.

Nonetheless, the look on their faces when they were asked why anyone should expect things to suddenly improve with Toro Rosso after three years of failure with McLaren was utterly priceless. Even the interpreter was lost for words.

At a time Chase Carey has reiterated that his non-dictatorial leadership is what the sport needs, as one watched yesterday's shenanigans, one could not help feeling that all this mess is going to come to a climax round about 2021, at which time Mr Carey will discover just how well a nicey-nicey approach works with these guys.

Though we were unhappy at Matteo Bonciani's 'hand of fate' on Thursday, when he stopped Daniel Ricciardo as he was about to talk about a T-shirt worn by Kevin Magnussen fans recently, he more than made up for it yesterday, scheduling a line-up that had something for everyone… albeit short on truth.

A farce from start to finish.