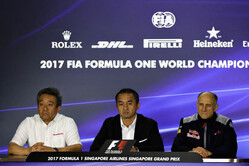 Moriyama-san, today the new partnership with Toro Rosso and also the separation with McLaren was announced. Can you make a comment from Honda's point of view?

Katsuhide Moriyama: Yes, good afternoon gentlemen, my name is Moriyama and I am the operations officer for Honda and today I am here representing Honda. Well, first of all, before we start, I would like to show my deep appreciation to the FIA and to Liberty Media for giving us such a huge support in order to conclude the deal in such a short period of time and in providing us such a special stage to announce our new start. So now regarding McLaren: it is very disappointing that we have to end the partnership without achieving our target, which we had set at the beginning of the project. Also it is a shame, the fact that we were not able to reach our performance target, that affected a lot the relationship. However, it also my pleasure that we can start a new relationship with Toro Rosso, a team with a very youthful energy and a history of nurturing the stars of the future. I think this is the start of a new chapter for Honda F1 and I'm already looking forward to seeing the opening race in Melbourne next year.

Moriyama-san there have been suggestions in the past few months that the Honda board actually discussed pulling out of Formula One, and if so why did the board decide that Honda would remain in the sport?
KM: For Honda, Formula One has started with the dream of our founder Mr Soichiro Honda and we already have a 50-year history in Formula One and for our company obviously Formula One is a very important culture as well as the DNA of our company. It is true that we have gone through a very tough situation now and nobody was satisfied with the current board, especially the board. It is true that we have gone through many discussions due to the dissatisfaction of the present and we discussed the project with the company and how to improve the situation. Quitting F1 was never an option for us. It is out goal to overcome this tough challenge and get back to fighting with the frontrunners of the sport. Our spirit, Honda's spirit, is going to come back and for next year our goal is to fight for the top three at the front of the grid.

Thank you very much. Yamamoto-san, you are the person who is actually dealing with all the negotiations with McLaren and with Franz and Toro Rosso. Tell us how it all happened from your point of view.
Masashi Yamamoto: It's true, because we have been struggling with the goals that we had, it's true that from the beginning of the season there had been discussions with McLaren about dissolving our relationship. Honda always wished to continue with McLaren towards a good result. Therefore, it is, for us, a shame and a pity, a disappointment, that we have to separate. But as you know, since the Italian Grand Prix the results haven't been famous and so our thoughts have started to change. So, as you know, in fact from the US Grand Prix last year, we work with Super Formula in Japan and from last year in the US we met with Dr Helmut [Marko] and we have been having conversations regarding the Red Bull [Junior] Pierre Gasly, who races in Super Formula in Japan. So I've had many opportunities to speak with Dr Marko since last year regarding the Super Formula and after the Italy Grand Prix, Dr Marko actually mentioned Toro Rosso. In fact, Mr Franz Tost has lived in Japan and knows Japan well, and as you know Toro Rosso is a very young team and I think we have many things in common and we are very much looking forward to working with Mr Tost.

Yamamoto-san, Honda has obviously had a very difficult in coming back to Formula One, so what makes you confident that you have can success with Toro Rosso?
MY: Although we do not have much time until the start of the next season, I feel that we are going to have a very good season, a good relationship between Honda and Toro Rosso. I believe that Toro Rosso is a pure racing team. The spirit of Toro Rosso is very similar to the spirit of Honda and in the short time we have I believe we can work smoothly and successfully for the next years.

Franz why is this the right move for your team and who is going to make the gearbox?
Franz Tost: First of all, thank you very much to the Honda management, to Moriyama-san and to Yamamoto-san to trust Toro Rosso. We at Toro Rosso are very proud and happy to work together with such an exclusive partner like Honda is and we are convinced that we will have a very successful future. The gearbox will be made by Toro Rosso, like the year before.

OK, what happens this year and next year with drivers? Dany Kvyat, Pierre Gasly we've heard about and also Nobuharu Matsushita. What are your thoughts on the drivers in this situation?
FT: Well currently we have two quite successful and competitive drivers with Daniil Kvyat and Carlos Sainz and I assume that they will finish the season with us and regarding the drivers for next year and then Red Bull will decide who is driving with us and of course we will also take into consideration any request from our partners.

Q: (Joe Saward - Auto week) A question for Yamamoto-san. What have you learned from your experiences in F1 during the past few years?
MY: Well, I have joined this project last April and I have realised that Formula One is indeed, as it's said, a top-level championship - quite different from the domestic championships that we have. To keep a good relationship and to keep everyone satisfied is very difficult. As a manufacturer I realise that Formula One's technology is very high and for Honda, that joined a year later, it has been a struggle for us to keep up with the new technology.

FT: Four years ago, it was in October, before the Suzuka Grand Prix, I visited the Honda factory. They have a fantastic infrastructure and I think in the meantime I think they have learned a lot about the new power unit and I am convinced within the next three years, also within the short term, Honda will improve their performance dramatically. They have already come up with real good upgrades during this season - unfortunately, because McLaren is very close to us - and I am 100% convinced that Honda will make big steps forward in the near future and within the next three years and therefore, once more, as I said before, we are more than happy to work together with such a fantastic partner. I am looking forward to next year because I think that Honda and Toro Rosso will have a successful season.

Q: (Graham Harris - Motorsport Monday) A question for Moriyama-san. Now that Honda has committed to come back with Toro Rosso and stay in Formula One for the next three years, what do you think Formula One needs to do to attract more Japanese automakers to come into Formula One as manufacturers?
MY: One important thing at the moment is that in Japan at the moment Formula One is not broadcast on free-to-air TV. So we believe that the most important factor is that at the moment the fans can only watch through satellite/pay TV, so that is maybe the biggest issue to increase the number. Obviously, us as Honda, it would improve our promotional ways of improving our Honda F1.

Q: (Luis Vasconcelos - Formula Press) For Franz: Getting a works engine was always one of your targets for Toro Rosso. Now that's done, do you think that your team has what it takes to fight with the other works teams like Ferrari, Mercedes and Renault?
FT: Toro Rosso is not Ferrari, Mercedes; we have another infrastructure. But I can promise you that we, within our possibilities, will do the best possible job and then the rest we will see. It is not always and only the money which is decisive for the success. I hope at Toro Rosso we will work efficiently, because this is our slogan, and to get the most out of the package and then the rest then we will see. The future will show. If necessary, then of course, maybe we will bring in more people, increase even the infrastructure, whatever is necessary to have the success that Honda wishes, but this is too early a stage to talk about the details of the infrastructure. But I am convinced we are in a position to fight successfully within the midfield or the forward part of the midfield and the rest then we will see. Then future will see.

Q: (Sandor Meszaros - Autosport ES) A question for Franz. Congratulations on the Honda deal, but I wanted to ask you about Sean Gelael, who drove today in one of your cars. We saw him, he performed in a very mature way in the Monza F2 races and he was very calm today. How do you see his performance and how do you see his future?
FT: Sean Gelael was testing with us two times. The first time was in Bahrain after the grand prix. He showed really a very, very good performance there. We were surprised, because I didn't expect that he would be so fast after I saw his Formula 2 race the day before. The second time he tested in Hungary. There he showed a real good performance, especially in sector one. In Sector two he was matching the times of our drivers. And now today he was out in Free Practice 1. He will do another Free Practice 1 and then we have another test in Abu Dhabi and at the end of the test in Abu Dhabi we will sit together and we will discuss further steps for the future. He will do next year Formula 2 as it looks like and then we will see. It depends always on the driver. If he is doing a fantastic job and improving his performance then of course there are always doors open. But first of all he has to perform really well next year in Formula 2 and then we will see. Today he did a fantastic job, we were really happy with him.