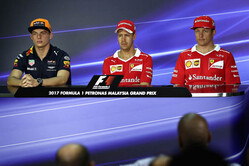 Start with a question to all of you. Clearly a painful moment in Singapore, three cars eliminated on the first lap of the grand prix, how do all three of you assess it now and how do you move forward?

Sebastian Vettel: I don't think there's much assessment necessary. Obviously on Sunday all three of us were unhappy, but you move on.

Max Verstappen: It happened, you know. You can't change it any more - it was just a very unfortunate moment. But there's nothing you can do about it - we just come here and we try again.

Kimi Raikkonen: Not really anything. Obviously moved on since Sunday, since the weekend.

Sebastian, you're a four time winner here. Since the summer break you've gone from a 14 point championship lead to a 28 point deficit to Hamilton. You've obviously seen quite a fluctuation throughout this year and in your previous title-winning years. Do you still think it's possible to get back on terms? Or do you rely on him to have problems?
SV: I don't know. I think we have a lot of races left. I think we have a strong car. I'm not too fussed about the amount of points. Obviously it's never good to be behind, I'd like to be in front but we're not so I'm not thinking about that.

Max, it's your 20th birthday on Saturday. You're committed obviously to Red Bull for next year. What kind of progress does the team need to make next year to satisfy you?
MV: I think for next year, the team and I, we want to win, so that's our priority and we'll see what happens afterwards.

And Kimi, it's the 19th and last Malaysian Grand Prix. You've raced in most of them, all but three, and you got your first win here. What do you think this event has contributed to the world championship over the years?
KR: I think to start with it's a very nice circuit, I think there's been quite good racing over the years here. I think the layout obviously helps that, and conditions have been always tricky. I think everybody has got more used to it since the early days, but nevertheless I think the racing has been good and that's the main thing. Obviously all the rest, it doesn't matter because we are here for racing and if that's good then that's fine.

(Flavio Vanetti - Corriere della Sera) Question to Sebastian. A 28 point gap is tough for sure, but in some ways could it help you because there is maybe less pressure and you don't have anything to lose?
SV: I don't look at it that way. I think it depends on the points you have at the end of the year or not, so yeah. As I said, if you would choose you want always to be ahead. I would rather not be a little bit behind, but overall it doesn't change anything for how you tackle the last six races from here.

(Jonathan McEvoy - Daily Mail) Leaving aside yourselves, who would you each nominate as the most able driver out there, the best?
MV: I find that one really difficult. I think you can only compare with your teammate, because you don't know what's going on in the other teams. Also, the car you know, it can suit you better, so I don't know to be honest.

SV: I agree with Max, I don't want to answer.

KR: I think it's pointless to answer this one. It's up to you guys, you're very good on it at least over the years, so do it again and we can obviously read it then.

(Ysef Harding - Xiro Xone News) Question for all three of you. Nineteen years of Malaysian Grand Prix, this is the final one. What have been some of your fondest memories of this race?
SV: Obviously it's a while ago, but for sure one of the nicest ones was 2015, my first win with Ferrari. It certainly was very special - we came here early in the season, at the very beginning of my time with Ferrari. There's still a lot of very nice memories coming up, I'm thinking about that day, and how the race happened, what happened after the race. I had a really good time. I think the other races, I'm not sure I remember all of them, but 2013 obviously was a bit of a special one - which came with a bit of noise after the race - but still I think it was a good race.

MV: Well, I haven't done that many races but I always enjoy coming here. It's a good track, and I think last year it was good to be second. I would have preferred to win, of course, but still you know for the team it was a great day. That's my fondest memory. Hopefully this weekend will be better.

KR: Obviously I won my first race here, it was a while ago now, but it obviously meant a lot. Then there was the win in 2008 with Ferrari, I mean it was a good fight with Felipe and obviously good memories, some bad memories over the years, but that's when you go many times in the same place that will happen - you have some good years and some not so good. But it's been pretty good.

(Jerome Pugmire - Associated Press) Question for Sebastian. You seem to have got over Singapore quite quickly, quite easily. How do you put that frustration aside so easily?
SV: Well, I think it would have been more difficult if I had lost the car somewhere in the race and it's obviously different but with collision at the start like that, I think we all three after the race, that was when we had to go to the stewards. What can you do? The lights went off, obviously, we did our starts, everyone was trying to move at the start and it was the way it happened. It ended up really bad for all three of us and that was it. Obviously I could continue a little bit more, but the damage was so bad that I had to stop anyway. Not much you can do - I think it's part of racing. It's also not the first time I've been in a situation like this and probably it will not be the last time. Hopefully it won't happen again, but it's part of racing. It happened, there's not much you can do, and therefore not much point in trying to look at it again and again, I think it's much better if your time and energy is spent looking forward.

(Livio Oricchio - GloboEsporte.com) This is more or less in line with the last question to Sebastian and Kimi. Sebastian, you are the leader of the championship since the beginning of the season till Monza, and then you lost it and you saw your one race lead to 20 points. What is the psychological impact of that in you and in the team? Will you discuss it so that it does not interfere in the rest of the season?
SV: I don't think it's necessary to discuss. As I said, with things like this happening, what can you do? We could have had major problems with the car, or I might have made a mistake, and it might be a different story. There's something you need to change, some way you need to react quickly to make sure it doesn't happen again, and it might be a different story. Looking at it now, obviously there's been one race where we didn't finish. Certainly didn't help that Lewis scored a lot of points, but that's the way it goes. Certainly we would all three love to have had a different race, championship yes or no. We just want to race, and that's what we set out to do in Singapore. All three of us didn't get very far.

(Jonathan McEvoy - Daily Mail) To Sebastian. At the beginning of this race, will you go about it in any, will you try to protect your lead, maybe be slightly less rash? How will you, what will be going through your mind on lap one of the race? And b, everyone's saying - all the experts - that the next five races or so all suit the Merc rather than the Ferrari. How do you respond to that? You obviously I guess believe it's all still alive?
SV: Some might say that in order for them to remain experts we have to prove them wrong every now and then, otherwise they will maybe be out of a job if they are never wrong! The second thing is I wanted to say it was flattering that you said 'when on Sunday you are starting from the lead' - providing, obviously, that we qualify on pole, so it's nice to have you on board as a fan! Not really. Every start is different, and the way Singapore happened you can look at it again and again; it doesn't matter. First of all it's done, and second I think it was pretty unfortunate for all three of us so we want to move on. Having said that, I can't promise you now what will be on my mind on Sunday when I leave the grid, but normally I don't, I never thought about the last race, so I'm pretty sure I'll be focussed on seeing what I can do on that race start on Sunday.

(Lennart Bloemhof - Volkskrant) Question for Max. It was obviously not your first frustration this season. Do you still expectations for this race or is that already something you completely don't have before a new race because of all the frustration you have?
MV: I'm here, I always try to do well. It's not my year in terms of Sunday finishes, but in general you have to try to stay positive, and to look at the positives. I think the speed is there, so we need to try again here in Malaysia, and see how competitive we are. It's a bit difficult to say. But last year I think was pretty alright, and we'll just try again.

(Lennart Bloemhof - Volkskrant) Question for all three drivers. How do you guys cope with the heat during a race weekend like this? Do you have any tips and tricks during the race? Is the preparation different?
KR: I don't think it's an awful lot different, really. It's obviously a bit more hot than other races, Singapore is quite hot. At least myself, I don't feel that we do an awful lot different things and it's probably drink a bit more, but that's about it. It doesn't feel too bad in the past, at least in the car, you more feel it in the practice when you keep stopping in the box and all the heat comes from there, but during the driving it's not too bad.