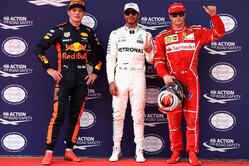 Lewis, what a great result for you. You must be very happy. That looked like a pretty decent lap?
Lewis Hamilton: Firstly, look at this crowd. I know it's our last grand prix here but this is the best crowd I've ever seen. Thank you so much for all the support. We had no idea how it was going to go today. I'm sorry for whatever happened to Sebastian, because obviously he was very, very quick through practice. But somehow we turned it round. The engineers did such a great job yesterday, the car felt great, for both Valtteri and I, and so it's a real surprise to be up here with these guys, so I'm very, very grateful.

Kimi come and join us. What a try that was! Happy with that? I'm sure you wanted just a little bit more. I would have thought you would have done one of the old karting moves - jumping up and down in the seat, leaning forward. Maybe you should do that next time.
Kimi Raikkonen: Yeah, it's OK, but obviously when you get that close it's disappointing. I made the most out of it. Yes, there are always places you can improve, but you are never going to get it 100% perfect anywhere. You always find some things you can improve, but I must say the car has been behaving nicely all weekend and it's been a pleasure so far. We'll try to get further than 100 metres tomorrow, and let's see what we can do.

Tomorrow is going to be important, obviously you have been on the front row before but this is going to be an interesting little drive towards Turn One. Are you ready for this? This crowd is looking forward to a big race tomorrow, yeah?
KR: Yeah, obviously it's a long way, so if you make a good start you will benefit quite a bit from it. It's a pretty tight first two corners and a lot usually happens. We'll try to make sure the first two corners go well and go from there. I think we're going to have a very good race car, so let's see.

Well here's a man we're going to get on - the birthday boy, that you got on very closely with in the last race. Hopefully that's not going to be the case. Max, happy with that result? You seemed to get the best from the car.
Max Verstappen: Yeah, I think it's good for us in qualifying to be in this position. I mean it's always good to drive on this track, especially in qualifying - Turns 5 and 6 are flat out, so it's a lot of fun. And also the crowd - it's amazing how passionate they are. So on my birthday to be third here is perfect.

I'm sorry to say, yes. Lewis, tomorrow, the race is going to be so important. We know what happened the last time out, but this is a long run up to Turn 1, but you must be looking forward to it, because this is the perfect situation for you.
LH: It is. Obviously we are going to have a tough battle with these guys. Particularly the Red Bulls had really great long-run pace yesterday, and today I think. I'm hoping our car has moved in the right direction for the race run but we'll see tomorrow. But there is a long, long run down to Turn 1, so lots can happen. But exciting to see all these guys coming out tomorrow and hopefully [it will be] the biggest crowd we've ever had.

You're going to be after the perfect start, Kimi, Max, tomorrow you're going to want to get in front of this guy, who is the man who is going to do that.
MV: I don't want to be sandwiched - that's the only thing.

Lewis, fifth Malaysian pole position, four years in a row here, and becomes the first man in Formula One history to get into the 70s of pole positions. What a turnaround from yesterday, and even from this morning. Seven tenths of a second ahead of your team-mate suggest that was a moment of inspiration. Tell us about it.
LH: We had such a difficult day yesterday; it was difficult to know where we stood. I didn't sleep very well, just like all my engineers as well, because we didn't know whether we would fix the issue or not. But today we arrived and the car was much better but still I think it looked like the Ferraris were a little bit ahead. We had some big calls to make going into qualifying and then those laps were, particularly the last one, the first Q3 lap, was very well put together, a very nice lap. I don't really know where it came from, to be honest, so I'm a little bit surprised at myself. As I said, it's a surprise to be up here. I'm very grateful. These guys have been driving exceptionally well all weekend. It's always a special thing to be able to extract a little bit more out of the car than it's particularly willing to go. That's what I've always enjoyed, since my dad would say... my first go-kart was fifth-hand or something like that, and he'd say it was like a four-poster bed. Not that my car was a four-poster bed today but I was hoping I could extract a little bit more out of it.

You acknowledged in Singapore that you had a slice of luck with what happened at the start, and a slice of luck with your main title rival Vettel starting from the back of the grid. You've got to capitalise on it, so will Valtteri have a part to play in it as Vettel comes through the field?
LH: I haven't really thought... I don't know what happened to Sebastian. I mean, he would have been up there with us, he'd been driving well all weekend, very, very quick, between him and Kimi. Very unfortunate for him, but of course we just have to continue to focus on our job and try to maximise on every opportunity that we get collectively. Hopefully we are in a good position for tomorrow. Obviously we have put ourselves in the best position for tomorrow but we still have a tough race ahead of us, so we'll just try and keep our heads down and hopefully those behind me and it will just unfold the way it unfolds.

Kimi, it equals your best qualifying performance here in Sepang: 0.045 of a second off pole position. A lot of weight on your shoulders obviously in qualifying from the Ferrari team with Vettel in trouble. You were on target, it seemed, until the final corner - tell us about it.
KR: Well, I don't know. Obviously, I only know how it was and I think overall, the whole weekend, it's been pretty straightforward. The car's been handling well. I think we were quite happy all day, also in qualifying but, y'know, you can always improve here and there. I don't think you ever going to make an absolutely perfect lap and it's a bit more painful when you get that close, for sure. There's places that you improve a little bit and it's just enough - but it wasn't today. Obviously was a shame for the team, with Seb's issue, whatever, not having him in the qualifying - but that's how it goes sometimes. I think the car's [inaudible] very well but to try to fix it and then obviously had some problem. It's a shame for him. Sure he will be good tomorrow. I'm happy but I'd rather have qualified in first place but I think tomorrow is a long race, it's going to be tough for tyres and I think we should have a very good car tomorrow. I have a good feeling about it.

...strong weekend thus far. I think it's the 11th time now this season you've out-qualified Daniel, so once again very strong qualifying performance. Four-tenths off today in qualifying but do you feel with what you saw yesterday in the long runs, quite low degradation, the car looked quick, obviously, the faint possibility of rain as well, that there's room for optimism in the race tomorrow.
MV: Well, for sure, if it rains, then then I think we always have a good opportunity. I think in the dry today, I'm actually very happy that I'm here in third because this morning - afternoon, the last session - I was struggling a lot with the balance of the car. Actually, the whole weekend has been up and down in terms of happiness with the car but we managed to do a good qualifying again. Really happy with that, of course. The car, except maybe the final run in Q3, before that was really well balanced, so I can't complain. I think we could have been a bit closer, definitely we couldn't have beaten them today but for us, to be third here, on this track, is perfect. Also, in the long runs, it was all looking good. If it's good enough, I don't know. We'll see tomorrow. From my side, I want to have a good Sunday finally. Because every time on Saturday it's always going well, but on Sunday I haven't scored a lot of points.

(Livio Oricchio - GloboEsporte.com) Lewis, in the long runs yesterday you didn't show good performance and today you have very good performance in one lap. Do you have an indication with this new setup for the race?
LH: Yeah, in the P3 we did a long-ish short run, only five laps. I think the car was in a much better position but I think we were something like four- or five-tenths off the other guys. So we shall see tomorrow whether that is still the case - but I think we made some changes going into qualifying that should suit the car better for tomorrow, so I'm hopefully that we will be there or thereabouts.

(Jerome Pugmire - Associated Press) Question for Max, as you turn 20, you're no longer a teen sensation so to speak. What is the highlights of your career. If you had to choose, for example, between Interlagos, coming through the rain and that victory on your debut, which would you choose?
MV: It's difficult. To be honest, I think my best memory is still from go-karting, when I won the World Championship, because you always dream of it, to achieve something like that, and especially... I worked really hard with my Dad, to achieve something like that, because he was my engine tuner, he was my mechanic. We have travelled the world together since I was four years old. I think I was 15 at the time. You win the World Championship in the highest category in go-karting. That was very emotional. Then the victory in Spain was also very emotional at the time - but I want to win a race on merit and not with luck. So that hasn't happened yet, so I think still that victory in go-karting is more satisfying.