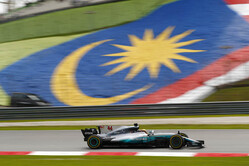 While Ferrari dominated this morning's session, pretty much as they did yesterday afternoon, it wasn't all plain sailing for the Maranello outfit.

A late scare for Sebastian Vettel turned out to be an engine issue and as a result the German will use the last of his allocation this afternoon even though the Italian team was hoping to hold off until next week at Suzuka.

On the other hand, the new engine is understood to be the latest-spec and therefore fortune might actually favour the brave.

No issues for teammate Kimi Raikkonen who was quickest, indeed over the break some of the Finn's crew helped work on Vettel's car.

Daniel Ricciardo was third quickest though the Australian insists that his best hope tomorrow is if the heavens open up. Meanwhile teammate - birthday boy Max Verstappen was sixth quickest 0.699s off the pace.

The 20-year-old was involved in a late incident involving Jolyon Palmer which it is understood the stewards are looking at.

Following yesterday's "worst Friday ever", Mercedes opted to split strategies, Valtteri Bottas sticking with the new aero package while Lewis Hamilton reverts to the old one. However, with the pair separated by just 0.210s - the Finn being the quicker - it leaves the Brackley outfit with a dilemma.

The midfield is as tight as ever, with McLaren hot on the heels of Massa and the Force Indias, while Magnussen and Hulkenberg were ahead of the Toro Rosso duo.

In all honesty, pole here is not as vital as it was in Singapore, but to start from the front would certainly be a psychological boost for Ferrari and Vettel after the nightmare in Singapore.

Ahead of Q1, the air temperature is 31 degrees C, while the track temperature is 47 degrees. Although bright and sunny, there is a 20% chance of rain, a fact borne out by the dark clouds in the distance.

With less than two minutes to go before the lights go green, the crew working on Vettel's car appears to have finished.

Grosjean leads the way, followed by Ericsson, Wehrlein and Hamilton, the Briton an unusually early riser.

While all are on supers, Hamilton - and now Raikkonen - are on softs.

Hamilton and Raikkonen are both advised of the head wind into T1 and the tail wind exiting.

Grosjean posts 34.943 to get things underway, as Vettel heads down the pitlane on softs.

The Toro Rosso duo go sixth (Sainz) and seventh (Gasly) as Vettel heads back to the pits. "Feels like I have no turbo," warns the German.

Quickest in all three sectors, Hamilton bangs in a 31.605.

Though Raikkonen improves, Bottas leapfrogs him, the two Finns separated by just 0.004s.

Replay, combined with the work going on in the garage, and the looks on the faces of the crew, suggests Vettel's issue is worse than thought.

A 32.838 sees Vandoorne go 8th, two spots ahead of his McLaren teammate.

Hamilton is out of his car and seemingly heading for a 'comfort break', the Briton satisfied with his 31.605.

With 2:28 Vettel appears to be coming up, his crew waiting for a gap. However, there is clearly still an issue, the tyre warmers are put back in place, the German's session over.

No histrionics however, he climbs from his car and thanks his crew.

Magnussen improves to 15th, but Gasly and Stroll - both of whom are in the drop zone - are still on track.

We lose Grosjean, Magnussen, Wehrlein, Ericsson and, of course, Vettel. All five being Ferrari powered.

While it is bad news for Ferrari, which now has to rely on Raikkonen, being at the back of the grid means Vettel can take on a whole new power unit and all it entails without losing any further positions.

Bottas is first out for Q2, the Finn subsequently joined by teammate Hamilton and Ocon.

Indeed, with an eye on the dark clouds that are closing in, Raikkonen is also keen to get out.

Vandoorne splits the Force Indias with a 32.278.

While Verstappen appears to have settled for his time, Bottas clearly hasn't, the Finn heads down the pitlane with 2:42 remaining. Indeed, he is followed by Hamilton and Ricciardo.

Alonso is unhappy that he has been released just behind his teammate. This lap will be a mess," he warns, "we needed to wait longer."

Perez improves to 6th (31.484) as Hamiton remains fourth despite being quickest in S1.

A late improvement for Vandoorne is bad news for Massa as Williams looks to see both drivers fail to make the cut.

Both Toro Rosso drivers also fail to make the cut, Sainz' cause not helped by a mistake in the final corner.