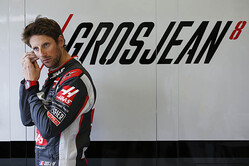 Haas has been given special clearance to work on Romain Grosjean's car overnight tonight following his crash in FP2 today.

During FP2 the Frenchman hit a raised metal drain cover at Turn 13 causing it to crash heavily, thereby requiring significant repairs to be carried out overnight.

The Stewards decided that in accordance with their powers under Article 11.9.2 of the FIA International Sporting Code, Haas would be granted a one-off dispensation, solely for the purpose of making repairs to the car, from the conditions of Article 21.7 of the Formula One Sporting Regulations, and that such waiver will not be considered as one of the "two individual exceptions" referred to in that Article.

The dispensation is subject to the following conditions, added the stewards:

1. It applies only to work performed on, or related specifically to, Car 8.

2. The FIA parc ferme cameras for both Cars 8 and 20 must be activated and not covered in any manner during the period from this decision until the end of the normal restricted time referred to in Article 21.7.

3. No work may be performed on, or in relation to, Car 20 (Magnussen) during this dispensation period.

4. The FIA Technical Delegate is authorised to take any steps he deems necessary to ensure compliance with these conditions.

The Stewards considered that the circumstances causing the crash were entirely and clearly beyond the control of the driver and the team (and any other driver or competitor) and consider them as "force majeure". It is noted that this decision should not be considered as a precedent in any manner or form.