Horner hits out at Renault... again 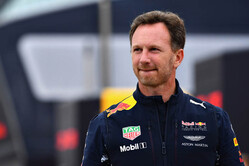 Though it has yet to be officially confirmed, it is almost certain that among all the various other announcements today, Renault will reveal that it is to stop supplying Red Bull with engines after 2018.

Even when the partnership was winning successive titles the relationship was difficult, with the Austrian team seemingly unwilling to give any credit to the engine manufacturer.

Under the new formula however, the relationship has been fractious - to put it mildly - and though Renault has fallen short of Mercedes (and this season Ferrari), Red Bull has still managed to successfully battle for podiums and wins.

However, finally weary of the constant criticism, and probably aware of Red Bull's potential switch to Honda in 2019, Renault is to pull the plug, ending its 11 year relationship with the Austrian outfit.

However, as the Singapore weekend got underway, a weekend when the paddock looks likely to provide more action than the race track, Christian Horner took another swipe at the French manufacturer.

Asked about the reports of Renault's move, the Briton told the BBC: "I think anything after 2018 at the moment is purely speculation.

"We have a contract in place for '18," he added. "Anything after that is at this point in time just paddock rumour."