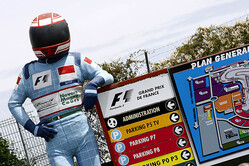 FOM has revealed that a new deal will see F1 return to free-to-air in France from next year.

The deal is for three years and will see just four races broadcast live, but the move comes at a time when Britain loses all live free-to-air coverage in 2019.

It's a canny move from FOM, as 2018 not only sees France return as host of a round of the Formula One World Championship, but the almost certain debut of Monegasque racer Charles Leclerc. Furthermore, other than Romain Grosjean at Haas, there is the ever improving Esteban Ocon, not forgetting the works Renault team and Fernando Alonso in a Renault-powered McLaren.

"The agreement will commence at the beginning of the 2018 championship," said FOM in a statement, "TF1 will show four Formula One Grand Prix races in exclusivity on free-to-air in their entirety.

Other than the French Grand Prix, one of the other live broadcasts will be the Monaco event.

The TF1 deal will "significantly help to further elevate the sport in the market", said Ian Holmes, Formula One's director of media rights.

FOM's commercial boss, Sean Bratches has made no secret of the fact that the increasing shift to subscription TV is going to harm the sport, and is therefore keen to retain a modicum of free-to-air coverage.

"Free to air is critically important to us," he told an FIA conference in June. "My vision, as it relates to media rights, is a hybrid of free-to-air and pay.

"Our plan is to balance the two but have a prominent, over the year, free-to-air voice. That is important from a fans, sponsors and relevance standpoint."

Coverage in France will be shown across TF1 Group's portfolio of channels and programmes, including weekly car television show "Automoto", and "Rendez-vous Sport", as well as on the news bulletins of TF1 and LCI.

"This agreement marks the return of Formula 1 to free-on-air on the TF1 TV channel, a long-standing partner of the sport, and forms part of our strategy to broadcast top-notch international sporting events," said Gilles Pelisson, Chairman and CEO, TF1.

"The whole group will mobilise to ensure that Formula 1 gets the largest exposure. We will be very happy to offer the sport to our audience possible at a time when our country will once again play host to a Grand Prix race on the legendary Le Castellet circuit.

"I am delighted to see Formula 1 return to TF1," said Holmes, "who, along with the broadcast arrangements we already have in place in France, will significantly help to further elevate the sport in the market.

"'Automoto' is a very well established and popular show. That, combined with TF1's widely recognised reputation of broadcasting the biggest events in France provides a great platform for us moving forward as we continually endeavour to evolve the Formula 1 World Championship and its broadcast coverage around the world."