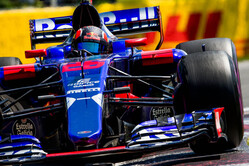 Ignoring the fact that an incident during qualifying has cost him three grid places for today's Hungarian Grand Prix, thereby dropping the Russian to 16th on the grid, the penalty point he has been given leaves him just two shy of a race ban.

The Toro Rosso driver was adjudged to have impeded Lance Stroll in the final moments of Q1, the Canadian, on a final lap intended to get him through to Q2, came across the Russian on the racing line at Turn 11 and had to go around the outside of the car, subsequently telling his team he was blocked.

For his part, Kvyat blamed his team, telling them that he should have been warned.

They subsequently determined that Kvyat was on an exceptionally slow lap having spun earlier and damaged his tyres.

Acknowledging that the Russian was warned by the team very late of the approach of Stroll, and the fact that Kvyat pulled as far to the right as he could as soon as he saw the Williams, the Stewards deemed these were not mitigating factors.

In their opinion, Kvyat was driving exceptionally slowly and taking the racing line at the end of Q1 when other drivers were attempting to set fast laps and this led to the unnecessary impeding.

As a result, the Russian was demoted by three grid positions, having qualified 13th, and handed a penalty point, bringing his total for the 12 month period to 10.

With 12 points over a 12 month period meaning an automatic race ban, Kvyat has to stay out of trouble and avoid further penalty points until the United States Grand Prix in late October, and with six races before then that's a tall order.

Given 2 penalty points following his clash with Fernando Alonso in Austria, a week later Kvyat picked up 2 more as a result of his first lap clash with teammate Carlos Sainz.

As ever, Kvyat believes that he is innocent and that the stewards are picking on him.

"I have to accept their decision," he told reporters. "Unfortunately we had a miscommunication with the team, the team didn't tell me anyone was coming.

"I was asked to bring the car in slowly because of vibrations," he continued. "The speed was so different and when I saw him, I went on the grass but for them it was not enough even that. I think they like to make an example out of me."