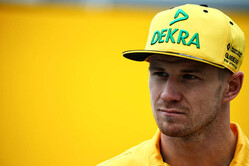 Nico Hulkenberg will take a 5-place grid penalty after his team elected to change his gearbox.

The German, who finished a convincing sixth at Silverstone - thereby equalling Renault's best finish since its return to F1 as a constructor - finished seventh in yesterday's second practice session.

Renault notified the FIA of the impending change just three days after Silverstone and due to the fact the unit had not completed the mandatory cycle of six races the German takes the hit.

There were new gearboxes also for Romain Grosjean, Fernando Alonso and Carlos Sainz but all three escape penalty because the Haas unit had completed the mandatory six events and the other two failed to finish the Silverstone race.

The grid penalty comes at the end of a difficult day for Renault, Jolyon Palmer damaging his car in FP1 after running wide over the notorious new kerbs and crashing out of FP2.