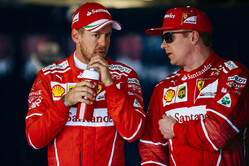 The big story of the day, if not the weekend, is that after being taken unwell last night, towards the end of this morning's session Felipe Massa was still not quite right and has subsequently withdrawn from the remainder of the weekend. At the eleventh hour, Williams reserve driver, Paul di Resta, has been called up.

With no time in the 'real' car, only the simulator, to take over the FW40, just ahead of qualifying, on this one of the most testing tracks on the calendar is mighty impressive and full marks to the Scot, whose last GP outing was Brazil 2013, for stepping up to the plate.

Having dominated both of yesterday's sessions, Daniel Ricciardo suffered a hydraulics issue earlier, the Australian completing just 7 laps. On the other hand, teammate Max Verstappen, who struggled yesterday, was fourth quickest.

Valtteri Bottas was third quickest and teammate Lewis Hamilton fifth, on the first weekend since we don't know when that a Mercedes driver hasn't been quickest in a single practice session.

Yesterday, unlike his rivals, Hamilton was unable to improve on the supersofts, while this morning he made a number of uncharacteristic mistakes.

No such problems for Ferrari however, where Sebastian Vettel and Kimi Raikkonen were on blistering form, the pair posting the fastest laps ever seen at this circuit.

Having been in the top ten in both of yesterday's session, McLaren was again impressive in FP3, Stoffel Vandoorne a mighty sixth and Fernando Alonso ninth.

Nico Hulkenberg was seventh, but the German has a 5-place grid penalty after his team changed his gearbox.

The nature of this tight, twisty track means the pole - or at least the front row - is important, consequently Mercedes will be hoping the Ferrari pair were on fumes earlier.

While there were numerous red flags yesterday, this morning was trouble-free even when Ricciardo parked his car at the side of the track.

The lights go green and understandably di Resta is among the first out.

Bottas posts the first time of the afternoon, but it's an exploratory 31.379. Moment later Hamilton posts 17.905 despite a minor mistake at the chicane.

No sooner has Vettel posted 17.676 than teammate Raikkonen bangs in a 17.382, even quicker than the Finn went this morning.

Hamilton improves to 17.492, thereby splitting the Ferraris, while Palmer posts 18.914 to go fifth.

With 10 minutes remaining the Red Bulls are on track. Ricciardo posts 17.924 to go fourth, while Verstappen subsequently leapfrogs him with a 17.887.

Going quickest in S3, Verstappen improves to second with a 17.266, just 0.022s shy of Vettel. Huge applause from his many fans in the stands.

Stroll improves but remain in the drop zone, while di Resta takes a bumpy ride over the kerbs.

Out come the yellows as Kvyat runs wide at T4 which is bad news for Perez who was on a fast lap.

Worth noting that Magnussen posted exactly the same time as Perez (19.095) but the Mexican did it first.