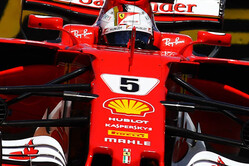 Ahead of today's opening session, the air temperature is 24 degrees C, while the track temperature is 43 degrees. It is bright and sunny, but also still quite windy. The risk of rain is 0%.

Daniel Ricciardo topped the timesheets in both of yesterday's sessions, the Australian clearly benefitting from Red Bull's raft of updates, enough to lead the driver to describe it as a B-spec car.

Weak in FP1, the Ferrari duo was stronger in the second session, while Max Verstappen also didn't appear to enjoy the same benefits from the Red Bull updates as his teammate.

Valtteri Bottas was third in FP2, while teammate Lewis Hamilton posted his best time on the soft rubber, unlike his rivals unable to improve on the supersofts.

Seventh quickest was Nico Hulkenberg, who has incurred a five place grid penalty after Renault changed his gearbox, while both McLarens were in the top ten for both sessions.

The uncharacteristically cool temperatures made it difficult to get a real idea of the pecking order, and while the Red Bull, particularly in Ricciardo's hands, looks very good, Vettel appears confident as do the Mercedes duo.

Of course, the numerous red flags didn't help, seriously compromising drivers at a time when their race sims would normally have been taking place.

Overnight it was revealed that after feeling unwell, Felipe Massa was taken to the circuit's medical centre and then hospital in Budapest for further checks. Although given the all-clear for this session, the Brazilian will undergo further checks before qualifying.

The lights go green, and Ericsson leads the way, followed by Kvyat, Grosjean, Magnussen and Sainz. Birthday bod (36) Alonso is another early riser.

All are on the medium rubber.

While most drivers pit, leaving Sainz as the only name on the board, six minutes in Verstappen heads out on supersofts.

The Dutch youngster goes on to post 19.012 as Sainz heads back out on the supers.

Palmer, on supers, splits the pair with a 21.163 as Massa gingerly climbs into his car.

Hulkenberg leapfrogs his Renault teammate, the German over 1.3s quicker.

Raikkonen improves to 17.909, the fastest ever lap of this circuit.

After 15 minutes, with just 8 names on the board, Hamilton is the only driver still to appear, while Ricciardo has completed a sole installation lap.

Hamilton heads out, but unlike the Ferrari duo, he is on the softs.

All now on supers bar the Mercedes drivers who remain on softs.

A mistake sees Hamilton get the china wrong, the Briton possibly affected by the Toro Rosso ahead.

Early days, but both Williams are still at the wrong end of the timesheets, while Perez, Palmer and Magnussen need improvements.

"Something is not working," complains Grosjean.

Meanwhile, something definitely isn't working for Ricciardo, the Red Bull driver having stopped at T9. "It's stuck in fifth," he reveals. Told not to change gear and to push the neutral button outside the car, the Australian subsequently climbs from the cockpit.

Yesterday's pace-setter looks on in frustration as his car is removed from the track.

Meanwhile, Palmer has improved to 14th, while Perez enjoys a spot of cross-country at T4.