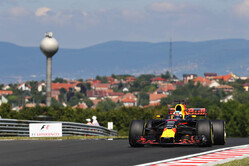 Red Bull driver Daniel Ricciardo not only beat last year's pole time by more than a second and half in FP2, but also came very close to breaking the all-time Hungaroring lap record from 2004, on the first day of running this year.

Ricciardo was fastest during both free practice sessions today, using the supersoft compound on each occasion, which is around 0.8 seconds faster than the soft. The other nominated tyre this weekend is the medium - mostly used for installation laps - with all three compounds run today as teams concentrated on assessing car balance on different fuel loads.

After a cloudy start, the weather warmed up during the day to more than 45 degrees of track temperature. Despite this, and the non-stop flow of corners at the Hungaroring, none of the tyres demonstrated any sign of blistering.

Mario Isola: "The new asphalt laid before the race last year showed itself to be smooth and offer good grip one year on; and its dark colour also means that it increases track temperature. Track temperature already started quite off warm in FP1 and then got around eight degrees hotter in FP2, with the supersoft tyre consistently quickest in both sessions. We were able to effectively assess the lap time differences between the soft and supersoft, which will be the main race tyres, but there's still a question mark about degradation due to the long runs being interrupted by the two red flags in FP2. At the front in particular, the pace seems very closely matched."