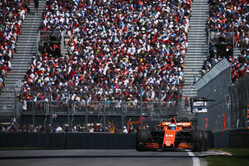 A difficult day in the McLaren Honda garage at the Canadian Grand Prix. Both Fernando and Stoffel did well to avoid any first-lap chaos - Fernando lucky to avoid being caught up in a three-car incident. Stoffel made a strong start from the line, taking advantage of the melee and crossed the line after the first lap in 11th place.

Both drivers opted for a one-stop strategy with a long first stint, and quickly settled into the pack. During the Virtual Safety Car following Max Verstappen's retirement, Stoffel was overtaken by Kevin Magnussen before the VSC had ended - for which Magnussen later received a penalty, although the damage had been done as it left Stoffel vulnerable to the chasing pack behind on the notoriously power-hungry straights of the Circuit Gilles Villeneuve. He lost four places in three laps, and was powerless to mount any sort of fightback, settling into 15th position for much of the remainder of the race following his sole pit-stop, until he was gifted a position (14th) on lap 67 of 70.

That position was granted to Stoffel by Fernando, who suffered a cruel fate three laps before the end of the race while in a points-paying position (10th) for the first time this season. On lap 67, Fernando lost oil pressure owing to a mechanical issue in the power unit, and was forced to retire from the race.

Fernando Alonso: "We were in the points with a couple of laps to the end but my engine gave up. I am frustrated, of course, but it's not only about losing a point today, of course.

"As a driver, we try to come here and drive as fast as we can, so missing on that point is disappointing especially for the guys, who have been working so much day and night, preparing the car, preparing the strategy and taking care of every single detail.

"Our chassis feels quite strong in the corners, but we are being overtaken by everyone in the middle on the straights. It's tough times.

"The support we have from the fans in Canada is great, so when my car stopped I thought we should give something back, and I went up the grandstand to give my gloves to the people who had been cheering me on."

Stoffel Vandoorne: "It was a difficult race. I think we more or less knew that before the start. We found it tough on the straights, and also the amount of fuel saving we had to do today really hurt us. The closing speed of the other cars was really impressive, so we were a bit of a sitting duck. In the end, we made it to the finish, but it's not the result we were hoping for.

"It's incredibly difficult to stay with the group ahead, and when we can stay with the group we are vulnerable and don't have the power to defend, so we have to invent some tricks to keep the other cars behind, and then it all starts to become very challenging.

"There's no point moaning about it - I'm just trying to get on with my job - but I just hope there will be improvements soon so we can actually start racing with the others."

Eric Boullier: "For the first time this season, running in 10th place within spitting distance of the flag, we dared to hope.

"OK, what we were daring to hope for were hardly rich pickings: a solitary world championship point for Fernando, who had driven superbly all afternoon, as he's driven superbly every race-day afternoon for the past two-and-a-half years. But, after so much toil and heartache, even that single point would have felt like a victory.

"And then came yet another gut-wrenching failure. It's difficult to find the right words to express our disappointment, our frustration and, yes, our sadness. So I'll say only this: it's simply, and absolutely, not good enough."

Yusuke Hasegawa: "Today was especially disappointing as Fernando was on course to score our first point of the 2017 season.

"Of course, it is not our aim to score the occasional point, but it would have at least been a step forward and a reward for all of the team's hard work these past few races.

"After avoiding the first-lap incident, Fernando managed his race well and had consistent pace throughout. The team also did a great job with the strategy keeping him ahead of his closest rivals. Unfortunately, with just a couple of laps remaining, Fernando's PU lost oil pressure due to a mechanical issue. We won't know the exact cause until we get the power unit back to Sakura for a full investigation.

"Stoffel had a great start to his race, but lost out during the Safety Car periods. Despite this, it was a step in the right direction for him today, and positive that he finished the race.

"There is still a gap between us and our competitors, and we must continue to improve our reliability. We cannot stay in our current position and we will maintain our tireless development in order to close the gap."