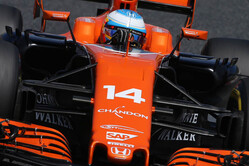 Today in FP1, both cars ran as per their planned programmes for much of the session, until Fernando Alonso stopped out on track shortly before the end, owing to a hydraulic leak in the power unit. Fernando ended the session in 16th position, having completed 13 laps. Stoffel had a more productive session, completing the usual set-up changes and aero correlation work over 29 laps, and finishing with the 11th-fastest time.

In FP2, fortunes were somewhat reversed. Stoffel had a smooth start to the session and was able to take to the track soon after a planned floor change. However, the team detected an issue with the MGU-H shortly before the end of the session, which curtailed his running by 15 minutes. The issue is now under investigation. Despite that, he managed 20 laps and finished the session in 19th place.

On the other side of the garage, the team worked hard to ready Fernando's car following the hydraulic leak, and fortunately it was a straightforward task that did not require any major component changes. Fernando got back behind the wheel just over 30 minutes before the end of running, and clocked the 7th-fastest time after 19 laps.

Fernando Alonso: "It's not been an easy Friday. We lost FP1 and most of FP2 owing to a hydraulic leak issue. Due to the lack of track time, the car isn't yet perfectly ‘tuned' and there's certainly room for improvement with regard to the set-up.

"Nevertheless, I think we know this circuit, we've raced here for many years, and we should understand how to attack qualifying and the race, so our time loss should hopefully not translate into too much of a handicap.

"Our expectations here are probably to be on the fringes of the top 10, but I'm glad we managed to put in some good laps at the end of the session, as we did in Barcelona, and we duly made it to P7 at the end. Tomorrow our priority is to push to get into Q3, but for that we need to do a good job."

Stoffel Vandoorne: "Today has been a bit of a tricky day for the team. On my side, the first practice session went pretty well, and I was able to spend time getting to grips with the track as it's my first time driving here. First off, the asphalt was quite dusty, but it improved quite a lot through the session. In the end, I was feeling quite positive and had a reasonable feeling in the car.

"In FP2 I started well and felt that the set-up changes we'd made between the sessions had gone in the right direction. Unfortunately, on the Ultrasoft I had a spin towards the end – and then, shortly after, we discovered an issue with the MGU-H, which finished our afternoon's running.

"All in all, it hasn't been a trouble-free day, which is a shame, but hopefully tomorrow everything will fall into place again and we should be able to improve our position."

Eric Boullier: "Today was yet another frustrating day for us, marred by a hydraulic failure for Fernando and an MGU-H problem for Stoffel.

"Nonetheless, both drivers were happy enough with the balance and feel of their cars, Fernando posting a particularly impressive lap towards the end of FP2.

"Tomorrow is a new day – and, as long as we have PU reliability, we should be in a position to make satisfactory preparations for qualifying."

Yusuke Hasegawa: "We faced a challenging opening day to the Canadian Grand Prix. Despite the smooth start we had with both drivers, Fernando had to stop the car during the final part of FP1 due to a hydraulic issue. Although the issue itself was not a big one, it was disappointing Fernando lost some of his session time in FP2 to fix the issue.

"Stoffel went through the session plan almost as scheduled this morning, but this afternoon we made a call to stop his car as we detected an issue with his MGU-H at the end of the FP2 session.

"Although we had a tough start today, we expect higher temperatures in tomorrow's qualifying. That means we'll have different conditions to today, which could level out the playing field from FP3, and we think that will give us greater opportunity to catch up to our rivals in terms of set-up despite the loss of time this afternoon.

"We'll fully utilise our time in FP3 to prepare for qualifying, and we hope to have a smooth session."