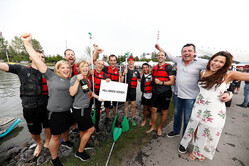 At long last, McLaren had something to smile about, as the Woking team splashed to victory in last night's raft race.

The event, a regular occasion over the Canadian Grand Prix weekend until the late 90s, has been revived by the sport's new management indeed, sporting and commercial bosses Ross Brawn and Sean Bratches both entered teams, as did the FIA.

The only no-shows were Mercedes, Ferrari and Force India who all clearly had better things to do.

Unlike previous runnings of the event when teams would build their own rafts from their own materials, the revived race sees the teams supplied with the necessary components and an hour in which to build their vessel.

Taking full advantage of the fact that the vessels had to be paddled across the Olympic lake and that outboard motors - such as Honda's - were banned, McLaren took its first win of the year, holding off Toro Rosso and Sauber.

Talk that Fernando Alonso is now considering taking part in the America's Cup is thought to be wide of the mark.