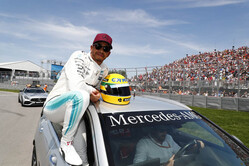 Sebastian Vettel headed a Ferrari 1-2 in this morning's practice session, and such was the confidence of the Maranello pair they watched the final couple of minutes of the session from the comfort of the garage clearly aware that nobody was going to beat their times.

A late charge saw Max Verstappen split the Mercedes duo, while Nico Hulkenberg did well to put his Renault sixth ahead of Felipe Massa.

While Toto Wolff has continued to play the underdog card, it is clear, as we all knew, that there was plenty of life in the old canine still. That said, Ferrari does appear to have the edge, the SF70-H simply looking so beautifully 'planted', able to work its tyres better and quicker than the W08.

Waiting on its update from Renault, Red Bull continues to be best of the rest, though both drivers have had issues here this weekend. As a result, there is increasing pressure on the Austrian team from Force India and even Williams, in the shape of Felipe Massa.

While pole position isn't as vital here as it is at some tracks, to take it, or, better still lock-out the front row, would give Ferrari a massive psychological advantage.

As ever, tyres have played a major part so far this weekend. While the ultrasofts are the quickest, both the supersofts and softs have set some pretty impressive times. However, whether anyone is prepared to gamble and try to qualify on the supers today remains to be seen.

Of course, the tyre conundrum is largely affected here by the fact the track is constantly evolving, changing from session to session, then back again overnight.

The lights go green and in no time at all there are ten drivers on track, among them Vettel and Raikkonen. All are on the ultras bar the Ferraris which are on supersofts.

Ocon and Kvyat are both warned about traffic.

Alonso goes third with a 13.974, the McLaren seemingly running on fumes.

When Grosjean reports "no grip", the Frenchman is told that "other people are struggling too". They omit to use the words "so there!".

Aa the Mercedes duo head out, Vettel improves to 13.046. That's on the supersofts remember.

Hamilton posts 13.076 to split the Ferraris, with Bottas posting 12.864 moments later. However, both Mercedes are on the ultras.

A 13.543 sees Ricciardo go fourth ahead of Raikkonen, only to be demoted when his teammate posts 13.177.

Hamilton posts 12.692 to go quickest while Vettel remains on track on his supers.

With 6:13 remaining, the drop zones is comprised of Palmer, Ericsson, Magnussen, Grosjean and Wehrlein, with Vandoorne, Stroll and Sainz hovering.

Grosjean improves to eleventh with a 13.939, just behind Alonso.

Massa improves to fifth, while teammate Stroll can only manage 15th.

Sainz is unhappy with teammate Kvyat complaining that the Russian isn't respecting him by using him for slipstreaming purposes but not repaying the compliment.

"Just to let you know I'm not going to let Daniil get my slipstream," the Spaniard warns. "It's really unfair. Next time I will bite if he doesn't respect me."

Wehrlein is off at T1 and has clouted the barriers, bringing out the yellows. Which is bad news for those on a hot lap, among whom were Stroll, Vandoorne and Magnussen. Palmer having improved just before the German's little excursion.

Wehrlein appeared to touch the grass as he entered the corner, immediately losing the back end and sailing off into the barriers.