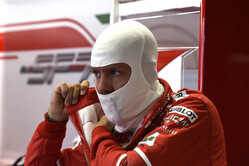 Kimi Raikkonen was the pace-setter yesterday, other than a minor spin at the start of FP! Barely putting a wheel wrong all day, which is more than can be said of his rivals.

Lock-ups and spins abounded as drivers struggled for grips on a track that is forever green with tyres and tyre pressures that they insist are not doing the job.

As ever, there were problems for the McLaren duo, Alonso suffering a hydraulics issue in FP1 and Vandoorne an MGU-H problem in the second session.

There were problems for Red Bull also, with Ricciardo losing track time with an engine issue in the morning and Verstappen stopping on track in the second session.

Nonetheless, Verstappen was the only driver in touch with the Ferraris and Mercedes, the Dutch teenage just 0.453sd off the pace.

Though Toto Wolff insists Mercedes is now the underdog, both Hamilton and Bottas looked strong yesterday, the Briton quickest in the morning session. However, as in Monaco, and previous weekend, while Ferrari can turn it on from the get go, the silver cars need to laps in which to get fully up to speed.

Though low on grip, degradation was low, and while the Red Bull duo never tried the ultrasofts, Bottas set his best time on the softs. Bottas was another who didn't use the softest compound.

Grosjean was his usual happy self, the Frenchman encountering all manner of problems and ensuring his team, and the rest of the world, knew about it.

Temperatures are up on yesterday, which will improve grip levels, but they are expected to fall again tomorrow.

The lights go green and, as was the case yesterday, the Ferraris are first out, followed by Grosjean, Magnussen and Alonso. On his out lap, Vettel waves to the crowd at the hairpin.

All are on softs thus far, bar Ricciardo who is on the ultras. Indeed, the Australian posts the first time of the day, a 1:21.907. Next time around the Red Bull driver improves to 16.784.

Palmer goes second with an 18.875, the Briton on the red-banded supersofts.

Vettel is back out on the ultras as Ricciardo improves to 15.278.

The German opens his account with a 14.533 as teammate Raikkonen heads out.

No sooner has Raikkonen posted a 17.824 to go third than he is demoted by a whole heap of drivers who have gone out at the same time, in no time at all the Finn is down in ninth.

A 14.895 sees Hamilton go second on the supersofts, only to be demoted by Sainz and then Ricciardo.

20 minutes in to the session, and there are 9 drivers still to post a time. Among them Verstappen and the Haas and McLaren duos.

"Can we go back to tomorrow's setting?" asks Raikkonen, before adding, "To tomorrow, sorry, to yesterday's?" We've all been there Kimi.

Bottas posts 13.905 to go third, both the Mercedes drivers on the supers.

"Nobody running soft in this session, but it could be a good race tyre: yesterday it showed similar performance to supersoft," says Pirelli.

Sainz improves to fifth as countryman Alonso digs deep and slots into sixth with a 14.018. Vandoorne is currently 12th on 14.785.

Magnussen is the latest driver to miss the final chicane - he won't be the last.

Raikkonen improves from seventh to second, just 0.002s off his teammate's pace. Like Vettel he is on a brand new set of ultras.

"Not a big difference in track temperature compared to this time yesterday," admits Pirelli, "but much less wind, which makes conditions more stable."

The Ferrari due break into the 1:12s barrier, Vettel posting 12.704 and Raikkonen 12.864, both quicker than anything we saw yesterday.

The German subsequently improves to 12.572. Clearly very confident, he gives the fans at T2 a wave.