Changes at Montreal ahead of Canada GP 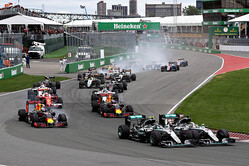 Although this weekend is looking likely to be compromised by the weather, with heavy thunderstorms predicted, the increased lap speeds anticipated following the 2017 regulation changes have led to a number of modifications to the Circuit Gilles Villeneuve.

Large sections of the ageing guardrail have been replaced by wall blocks, mainly in Turns 1, 2, 3, 7, 8 and 10. Furthermore, all the new walls have been fitted with new debris fences of varying height. A new debris fence has also been installed on the wall on the driver's right between Turn 14 and the finish line.

Finally, a second gate has been installed in the pit wall.

As ever, there are two DRS zones however they share a single detection point, which is located 110m before Turn 9.

The first activation point is 55m before Turn 12 and the second is 70m after Turn 14.