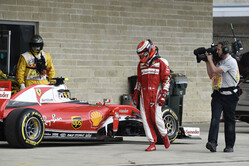 In a somewhat dull race, as is often the case it was Kimi Raikkonen who livened things up.

However, rather than tearing a strip off his engineer, getting up close and personal with 'Mad Max' or even finding an unusual route around the outside of the track, the Finn, with the aid of gravity, found a unique way of (re)entering the pitlane.

Having pitted for softs at the end of lap 38, the Finn was released back on to the track. However as he left the pitlane and headed up the hill towards Turn 1 it was clear something was wrong.

Stopping the car, he told his engineer who responded that it was unclear if the right-rear wheel had been properly fitted.

Raikkonen argued that he could make it back to the pitlane not under power, which would be illegal, but by freewheeling backwards, which he did.

However on arriving back in the pitlane there was nobody there to assist him, the team having already given up following its error... the latest in a long line of such errors.

The stewards subsequently deemed that the car was released in an unsafe condition, a breach of Article 28.13 (c) of the Sporting Regulations, and handed Ferrari a 5,000 euro fine.

Other than losing out on points for fourth which would have kept him ahead of his teammate, the Finn was angry and demanded an investigation into how the team's hi-tech system gave him the green all-clear before the wheel nut had been fully tightened and the wheelgun removed

"The reasons behind why it went green, we have to investigate and understand," he told reporters. "Hopefully, in the future, to change whatever is needed for it not to happen.

"The green light came on and obviously I will go," he added. "Why did it come on when we were not ready? The wheel was still on when I stopped, but it wasn't 100% so we had to stop. Unfortunately, there is no way to recover from that."