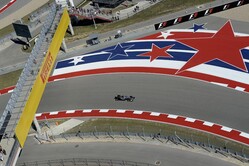 Max Verstappen led a Red Bull 1-2 in this morning's session, though to be fair Nico Rosberg aborted his Q3 sim lap and Lewis Hamilton simply ran out of time.

On the other hand, the Red Bull duo has looked good all weekend thus far, Daniel Ricciardo impressing his long runs on Friday.

While Kimi Raikkonen wasn impressive third, teammate Sebastian Vettel only completed 8 laps having suffered a gearbox issue around halfway through the session.

A red flag due to Pascal Wehrlein's departure into the kitty litter cost ten minutes of running, but it was almost worth it to hear the exchange between the German and his engineer, the youngster receiving the sort of stern word usually reserved for one's mother.

With Mercedes yet to show its hand - though we got a fair glimpse yesterday - it remains to be seen whether Red Bull really can challenge for pole, even so, tomorrow will be another case entirely.

As expected the Force Indias are looking good, certainly better than arch rivals Williams, while McLaren might also get a car into Q3.

A late charge saw Jolyon Palmer improve to twelfth, while the Haas duo had a slightly better session than yesterday's nightmare.

Though newly retained by Toro Rosso for 2017, along with teammate Daniil Kvyat, it was a somewhat flat morning for Carlos Sainz, the Spaniard suffering two punctures. Having suffered a puncture to his left and right rear the second failure - which drew a WTF from the driver - was followed by chaotic scenes in the garage where Pirelli technicians jostled with Toro Rosso engineers and even the FIA's Jo Bauer as they sought the cause.

With this being a wide track at all pints - well, it is Texas - pole isn't as vital here as it at some tracks. Nonetheless, one would rather start from the front row than have to begin the race by picking off the opposition. Then again, despite the width of the track drivers are still abusing the track limits even if it means a bone rattling ride over the kerbs.

We are expecting both Red Bull and Mercedes to attempt to make it through to Q3 on the soft tyre as opposed to the supersoft.

Wehrlein is first out, followed by Ocon and Perez.

Wehrlein gets things underway with a 39.319, as Hamilton heads down the pitlane on supersofts.

Ericsson posts 39.017 and teammate Nasr 39.703, making Wehrlein the meat in a Sauber sandwich.

The Haas duo doing a Ferrari, giving one another a tow on the various straights. However, it only works for Grosjean who posts 38.520 to go quickest, Gutierrez can only manage 51.317.

Nasr reports that his brakes "don't feel right" as Hamilton goes quickest with a 36.296. Moments later Rosberg goes second with a 36.397.

"I need more information quickly, come on, come on," urges Palmer referring to track position and traffic. His engineer is clearly flustered.

Raikkonen goes fifth and Vettel sixth, both struggling in the infamous T19.

Palmer goes thirteenth with an impressive 38.084.

Button, Ericsson and Nasr have the track to themselves as they attempt to escape the drop zone. Sadly, only the Briton appears to have the equipment needed to do the job.

All running thus far has been on the supersofts.

A PB in S1 for Button, the Briton maintaining the pace into S2. At the line he posts 38.327 to go sixteenth, his final sector, in particular, hampered by traffic.

Nasr fails to improve but Ericsson does, posting 38.040 to go 13th, thereby demoting button to the drop zone.

Magnussen improves to sixteenth, but a late charge from Gutierrez drops the Dane to seventeenth.

Grosjean fails to improve, a massive blow to Haas at its home grand prix.

Button complains about Palmer saying he cost him time in T20, while the Renault driver is none too happy with his team for sending him out when it did. "That was a ******* disaster," storms Palmer. Nonetheless, he made the cut.