Mercedes duo in a league of their own in FP1 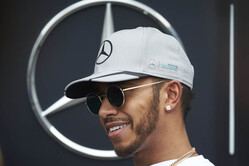 At Manor Jordan King makes his FP1 debut while Force India has Alfonso Celis on duty. They replace Wehrlein and Perez respectively.

While the fight for the title is the main focus this weekend, there is also a lot of interest in Haas, the first American team to race on home soil since 1986.

Once again, a number of drivers are trying the halo device in this session, among them Nico Hulkenberg and Valtteri Bottas.

The lights go green and Bottas gets things underway, followed by Vettel, Ocon, Gutierrez and Kvyat.

More and more drivers head out on a mixture of all three compounds.

Verstappen heads out, his Red Bull covered in sensors.

Five minutes in, all but Magnussen have made an appearance.

Once Magnussen finally completes an installation lap there are several minutes of total inactivity.

Eventually King breaks the deadlock, the Briton heading out to give the crowd something to look at. The Manor driver goes on to post the first time of the weekend, stopping the clock at 1:47.101.

Rosberg is the fifth driver to post a time and the German gives notice of his intentions by banging in a 40.223. Bottas, on softs, compared to Rosberg's supers, posts 41.938 to go second.

Also on supersofts, Hamilton goes quickest with a 39.246.

Verstappen reveals he is hitting the limiter in eighth gear.

It's only FP1 but Vettel is already getting frustrated, the German gesticulates at a very slow Palmer.

Rosberg complains of oversteer at low speed, while Kvyat complains of "lots of sliding". Gutierrez confirms that he has flat-spotted his tyres.

Still sliding, Kvyat says he feels he should pit, but he is told to do another lap.

Ericsson complains of graining to his front tyres.

After forty minutes, when the teams need to hand back a set of tyres, Hamilton is quickest, ahead of Rosberg, Vettel, Hulkenberg, Raikkonen, Bottas, Ricciardo, Verstappen, Massa and Sainz.

Not the best session thus far for Gutierrez who has only completed 5 laps and is twentieth, 5.6s off the pace.

Once again, silence falls over the circuit.

After several more minutes of inactivity, Button heads out to get the show back underway. On the medium rubber the Briton improves to 11th with a 41.663.

The cameras pick out Adrian Newey in the Red Bull garage.

On softs, Rosberg goes quickest in S1, maintaining the pace into S2. At the line the German posts 37.743, eclipsing Hamilton's best, set on the supers, by 0.958s.

Hamilton heads out, also on the yellow-banded rubber, as Verstappen (mediums) goes third with a 39.379. While he is quickest in S1, Hamilton loses pace in S2. He subsequently aborts the lap.