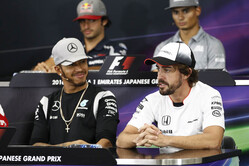 Mercedes has revealed that Lewis Hamilton will take part in Thursday's official FIA press conference at the Circuit of the Americas, the second successive race weekend that the Briton has been called on to attend.

It was his antics during the Thursday press conference in Suzuka that kick-started a difficult weekend for the Briton, culminating in some savage attacks in the British media on the Monday after the race.

The official press conference in Japan was marked by Hamilton playing with his mobile phone using Snapchat to post images of fellow drivers and interact with his followers.

Admitting via the app to his followers, and in person to the media present, that he found the press conferences, stale, boring and a waste of his time, a subsequent media backlash only made matters worse.

At the post qualifying press conference Hamilton accused the media of disrespect and walked out, insisting that he would not be attending any further press calls.

Though he did in fact attend the post-race press conference, having driven a superb race to third following a poor start, media coverage in the British press on the Monday suggested battle lines had been drawn, sections of the media not only questioning his attitude but his state of mind.

While Mercedes played down the situation, it is clear the FIA intends making a point and consequently Hamilton finds himself back in front of his beloved media on Thursday.

Furthermore, despite his claim that he will not talk to the written media - even to the point of blocking some journalists on Twitter - Mercedes media schedule for Austin reveals the Briton will be on duty for all the open print media conferences.