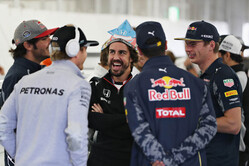 Was the Japanese Grand Prix the turning point of the season, or simply the next chapter following Nico Rosberg's breakout drive in Malaysia a week earlier? That's what the Pitpass team is in the studio to discuss this week, along with the plight of Ferrari and Sebastian Vettel, Max Verstappen's defensive driving and the storm that was Hurricane Lewis.

Chris Balfe, Max Noble and Mat Coch managed to forget the biscuits in all the excitement of Suzuka, preferring instead to marvel and applaud the performance of championship leader Nico Rosberg.

After a getting a glimpse of the German’s growing confidence and self-belief in Sepang, the Japanese Grand Prix saw him once again stamp his full authority on a race. Whether this was the race that broke the back of the championship or not we'll have to wait and see, though team-mate Lewis Hamilton appears to be feeling the pressure.

Has he, as the British media proudly proclaims, reached meltdown though? The team discusses at length Hamilton's comments from the weekend, analysing what might have caused them and whether there are other forces at work behind the scenes which saw the reigning world champion pick a battle with the British media.

It's a fight Balfe suggests he's not likely to win, the Fleet Street pack seemingly in the process of knocking down a man they believe they turned into a superstar. So what does Hamilton do from here, and was he showing the sport the direction it could or should be going by engaging with his followers on Snapchat instead of journalists across the weekend? And what on earth has the late Lou Reed got to do with it?

If Hamilton is feeling the heat so too is Sebastian Vettel, a man who according to the team looks a shadow of his former self. The swagger is gone, the wins have dried up and instead of a boss with a twitchy foot he now works for a boss with a sharp tongue, one all too ready to throw the team under the bus in pursuit of success. Is this the right approach or is Vettel the man to lead the team out of its comparative dark age the way countryman Michael Schumacher did?

McLaren's weekend on pseudo home soil didn't go to plan with a weak performance from both drivers. After a number of positive showings from the team in recent races it was a blip on the radar, one that came at perhaps the worst possible event of the season for a team whose engine manufacturer owns the Suzuka circuit.

Force India and Max Verstappen caught the eye of the team, while Williams caught their ire for another Grand Prix that saw them comfortably outperformed by their nearest championship rivals.