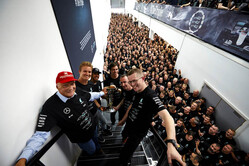 With tiresome predictability, the British media began its takedown of Lewis Hamilton on Monday morning.

Casting doubt on his psychological state, broadsheets and tabloids accused the Briton of going into meltdown at the weekend.

For those wondering, Hamilton hadn't attacked Rosberg on the podium, nor had he wrecked a hospitality room or thrown a TV from the window of his hotel suite, he hadn't even sworn at back markers ignoring blue flags.

The Briton's 'crime' was that he dared to criticise the British press and for that he must pay the price.

While journalists offered their sage advice on why Hamilton's championship, indeed his very life, is falling apart, teammate Rosberg, a man who has worked alongside the Briton since 2013 and known him since they first raced one another in karts as teenagers, leapt to his defence.

"It's complete rubbish," he told Sky Sports as the team celebrated its third successive constructors' title. "He's on it as never before, fully motivated and does massive work hours also.

"Behind the scenes he is as focused as ever, especially after a setback like Malaysia," he continued. "He was working the longest hours I've seen him work with the engineers in many, many months trying to find those little bits of lap time. I've seldom seen that from him in the last years, such a large amount."

Asked if he feels his own championship hopes would be boosted by what the media terms Hamilton's "self-destructive streak", Rosberg laughed and said: "I haven't seen any self-destruction. The Lewis I saw was massively motivated and focused, and anyway it's about me getting the best out of myself, and not focusing on what Lewis' state of mind is."