Hopefully, what happened in Suzuka stays in Suzuka 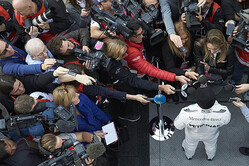 While Toto Wolff is convinced that Lewis Hamilton's media rows in Japan will not impact title run in, the media may have other ideas.

Not for the first time in his illustrious career, events off-track tended to overshadow Lewis Hamilton's brilliance on-track over the course of the Japanese Grand prix weekend.

The Briton, who has always enjoyed a love-hate relationship with the media, raised its ire on Thursday when he spent much of the official press conference interacting with his followers on Snapchat. When asked what he was doing the Briton admitted it. Indeed, having told his followers that "this sh*t is killing me", by which meant the press conference he went on to admit to the reporters present that he found the whole process boring and a waste of time.

Fact is, very little is ever learned at the official press conference, especially those featuring the drivers. What with political correctness and a sport driven by sponsors that want no hint of scandal, little of worth is ever said.

However, having dared to "disrespect" a (British) media which has always adopted the 'we build 'em, we knock 'em down' mantra, the Briton compounded his disdain for the press the following day when he walked out of Mercedes own post-qualifying press conference.

"The smiles on your faces will probably be no longer", he said, before raising his voice, just a little, and adding: “I am not actually here to answer your questions, I have decided.

“With the utmost respect, there are many of you here that are super supportive of me," he continued. "And those of you hopefully know I know who you are. There are others, unfortunately, that often take advantage of certain things.

"The other day was a super light-hearted thing," he said, referring to the Snapchat saga, "and if I was disrespectful to any of you guys, or if you felt that I was disrespectful, it was honestly not the intention. It was just a little bit of fun.

"But what was more disrespectful was what was then written worldwide," he said. "I don't really plan sitting here many more times for these kind of things so my apologies and I hope you guys enjoy the rest of your weekend."

And with that he walked out.

Needless to say, in the British press his comments got more coverage than the session in which he had just lost out to teammate Nico Rosberg, the media, which only days earlier had gleefully sucked up his claims of bias, was now turning against him.

While the Briton's race got off to the worst possible start, his side of the grid being damp and thereby at a disadvantage to Rosberg and those behind him, a typically gutsy performance saw him finish a convincing third - though this was somewhat overshadowed by his team’s decision to protest (then later withdraw) a move by Verstappen. Indeed, Hamilton took to Twitter to criticise the protest.

Though he is now 33 points behind his (arch) rival, all is not lost, at one stage earlier this season he was 43 points down.

Following a difficult weekend, Hamilton returned to the UK last night along with team boss Toto Wolff and Niki Lauda, before getting his first taste of the 2017 Pirelli tyres when he tests them for the first time at Barcelona on Wednesday.

While today will see celebrations at the team's Brackley HQ, having scored its third successive Constructors' Championship, there will also be meetings behind closed doors in an attempt not to allow the current situation to get out of control.

Wolff insists that that the off-track shenanigans will have no impact on his on-track performances, indeed he believes the Briton will possibly benefit from the saga.

"I've seen a Lewis in Malaysia that was really on a roll, dominating the weekend and then we let him down with the engine failure," he told reporters.

"During the last week, with all these things around the press conference, what happened on Saturday, whether it affects him or not I don't think so, because it is not his priority," he added. "I wouldn't bring it down to the start because the racing was great afterwards, how he recovered was really exceptional.

"Just after the race is not the right moment to put the finger where it hurts," said the Austrian. "We need to calm down and find out what happened and regroup. My learning from the last couple of years is I've found that 24 hours later things looks different than they appear after the race.

"Our main emphasis will be to build him up and enjoy the time at home before Austin," he continued. "We have ten days. It is not such a rush like last week and he will come back strong in Austin.

"It is not over," he said of the title fight. "There are four weekends to go. He will regroup.

"Remember when Nico won eight races in a row and Lewis had a wining streak. He is very strong, he needs the enemy, and that is how he functions.

"Lewis functions best when he's under pressure and when he has a target. And I have no doubt this will be an intense fight to the end. It is far from over."

As we have seen previously over the years, Lewis will either rise above it all or he will allow it to get to him, allow the 'wound' to fester.

Fact is, sections of the media smell blood, and in a world where bad press and negativity sells, there will be those eager to destabilise the Briton, fully convinced it is they who got him where he is today.