Drivers and Senior Management return from Japan to a winner's welcome, with a day of celebration alongside colleagues at both Mercedes-Benz Formula One factories.

Seventeen races, hundreds of hotel rooms, thousands of air miles, countless man hours and one incredible achievement at the end of it all. The 2016 season has been a spectacular journey for the Silver Arrows and another chapter proudly etched into the Mercedes-Benz motorsport story.

A third consecutive FIA Formula One World Constructors' Championship moves the three-pointed star into uncharted territory - building on the back-to-back successes of the 1954 and 1955 seasons to complete an incredible triple in the hybrid Formula One era.

With 15 wins, 28 podium finishes, 16 pole positions and 10 fastest laps from 17 races, the Mercedes-Benz PU106C Hybrid Power Unit has taken 50% of all available World Championship points thus far in 2016, leading 81% of racing laps in the process. Meanwhile, the Mercedes-Benz F1 W07 Hybrid has taken 35% of points available, while also leading 81% of racing laps.

To mark another phenomenal year for the Silver Arrows, race drivers Lewis Hamilton and Nico Rosberg joined the team's Senior Management at Brixworth and Brackley for a day of celebration across both sites.

Toto Wolff, Head of Mercedes-Benz Motorsport: Standing here with the Constructors' trophy, with the two stars that will become three in December, is such a proud moment. It's really a great achievement what we have done in the last three years. I met Ross Brawn a few weeks ago. We had a coffee and he told me that what makes him so proud of this organisation is that we could easily have dropped the ball. But all of us, together, have kept that ball up for three years in a row now - and that's quite an achievement. It's a great honour to work with all of these guys and girls. From Paddy and Andy, who push us all so hard intellectually, to our great drivers, who have been a massive part of this success, to the hundreds of people who work their fingers to the bone day in, day out to create the tools and the resources we need to succeed. I've said before and I believe it more all the time that we have the best driver pairing in Formula One - and the best team of people behind them all the time. All of them are pushing each other to new levels. Just when we think the car can't go any faster, somehow we find another tenth of a second and it blows us away every time. It's only when you put all of that together that you get to where we are today. I was asked the question at the weekend: "What is the silver bullet for this team? Is there one particular reason why we are where we are?" The only thing that came to my mind is that there are 1,500 reasons. It's all of these 1,500 people here at Brackley and Brixworth who made this dream a reality and I thank each and every one of them for their part in this story. 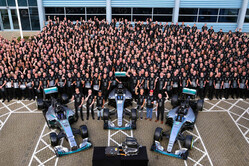 Paddy Lowe, Executive Director (Technical), Mercedes AMG Petronas Formula One Team: We came away from 2014 with some phenomenal results that we never expected were possible in this modern era of Formula One. In the aftermath, we suspected it would be a one-off and it's been truly extraordinary to see the team maintain that level of dominance across three seasons. It's testament to the extraordinary work of everyone at Brackley and Brixworth. It's not just about working hard, as everyone certainly has, but working smart, too. A huge congratulations to everyone involved for their contribution to this success.

Andy Cowell, Managing Director, Mercedes-AMG High Performance Powertrains (HPP): It's a real pleasure to stand in front of everyone at both factories and see so many faces that have contributed to this extraordinary success. It's an incredible team of people, spread across two sites but with one common objective - to keep adding the Mercedes name to that list of Constructors' World Champions. It's been an amazing journey since these two teams came together as one in 2010 to make these achievements possible.

Lewis Hamilton: I tell you what, it never gets old being up here, seeing all of these faces. What a joy it's been, being part of this team. I'm incredibly proud to drive the cars that all of these guys and girls have built. Each of the past three years, Nico and I have without doubt had not just the best cars on the grid but the best cars we've ever driven. We owe all of them so much. As drivers, we're just one small link in the chain. All the hard work everyone has put in to get us where we are is just remarkable. As a racing driver, this is what we dream of having - the beasts that they've built. Knowing that, every time you get behind the wheel during a race weekend, you've got a car capable of taking the fight to teams like Ferrari and Red Bull. And, more than that, knowing that everything this team has created gives you the chance to extract the maximum from your own abilities... there's no greater feeling. I'm so proud of each and every one of them and proud to be a part of this incredible journey with them. It's humbling to represent them all out there on track and I'm excited about going for a fourth together next year and hopefully many more beyond that. But, for now, it's important that we all cherish this moment because together we have created history. In decades to come, we'll all look back on these days and remember how incredible they were. A big thank you to everyone once again. We're going to continue to push on track as I'm sure everyone will back here at the factories too.

Nico Rosberg: I've been here since day one of this project in 2010 and it's really phenomenal the journey we've taken together towards being the best team in Formula One, making history along the way and re-writing the record books. What we've achieved together is mind-blowing and I'm really, really proud to have played my small part in that. Thanks to all of these people, our job as drivers is even more enjoyable out there, which is saying something! Every weekend I arrive at the track mega excited knowing I have the car to take pole and win the race. It's an unreal feeling. I can't wait for the final four races to go out there and give it my all in this awesome Silver Arrow. It's going to be an intense battle between Lewis and myself and I hope everyone at Brackley and Brixworth can enjoy it a bit more now from the edge of their seats! Today, though, we have to say a massive thank you to each and every one of these incredible people here today and celebrate the achievements that they have earned and deserve so much. Hopefully there will be many more to come.