Baldisserri: Ferrari not a team 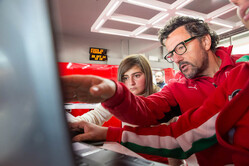 The Italian, who was moved from his job as Chief Track Engineer during one of the Maranello outfit's numerous purges, was subsequently appointed manager of the team's Driver Academy (FDA), a role he later quit in order to manage FDA protege Lance Stroll.

As he watches his old team lose ground not only to Mercedes but Red Bull and face its first winless season since 2014, the Italian has finally spoken out, claiming that the Maranello outfit is no longer a team but a group of scared individuals.

"Unfortunately neither Marchionne nor Arrivabene have experience in racing, a culture that the Scuderia of today has lost," he told Corriere dello Sport. "They are no longer a team, but a group of scared people.

"There is a climate of fear," he added. "The boys don't take risks for fear of being fired in disgrace."

Referring to the most recent change, which sees the team adopt a McLaren-style of horizontal management following the departure of James Allison, he said: "It doesn't mean anything. The chain of command in Formula 1 has to be more than vertical, it must be military.

"The number ones are there to show the way, to motivate people, to decide, and if you make a mistake, you should not be fired. This happened to Allison, it was a great loss."

Days after Arrivabene appeared to fire a shot across Sebastian Vettel's bow, a move no doubt prompted by Marchionne, Baldisserri said: "Raikkonen is doing better than in 2015, but Vettel a lot worse.

"It's important for Ferrari to recover him and to hold on to him, at least in the short term," he added.

Indeed, one recalls Patrick Tambay's words in the wake of the team's sacking of Alain Prost in 1991 with one race still remaining, the Frenchman having criticised the team publicly. Tambay, himself a former winner with the Maranello team, said that Ferrari appeared hell bent on self-destruction having just fired the best driver in the world, it’s "last hope".

Without doubt there is a problem at Ferrari, and not for the first time.

Baldisserri, who has Ferrari in his DNA, should be listened to, for these are not the words of a disgruntled former employee, rather a man who cares passionately and genuinely about the team.