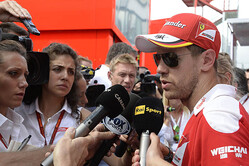 Last week's first lap accident at Sepang saw many claim that Sebastian Vettel is overdriving his car in order to make up for the frustration at not being able to take on the Mercedes and Red Bulls.

It was the latest in a string of incidents in a season which has seen the four-time champion overshadowed by his teammate Kimi Raikkonen.

The Finn being Ferrari's most recent world champion, back in 2007, many saw Vettel's move to Maranello as a desire by the German to emulate his hero Michael Schumacher, who, along with Jean Todt, Ross Brawn and Rory Byrne, created a team that was to totally dominate the sport in the late 90s and early 2000s.

However, as Ferrari continues to lose ground to Mercedes and Red Bull, and Vettel loses out to his teammate, team boss Maurizio Arrivabene has sent out a clear warning to the German to stop trying to organise the team and to focus on his driving.

"Today a lot of things are changed, what had worked with Michael might not necessarily work with Sebastian," the Italian told Sky Sports Italy. "Sebastian just needs to focus on the car.

"He is a person who gives so much, and sometimes this means he is interested in a bit of everything, so sometimes you have to re-focus him, remind him to be focused on the main job.

"He does not do it in a polemical spirit," he added, "but because he is totally immersed in the family that is the Ferrari team."

Referring to suggestions that a new contract might help Vettel's confidence, Arrivabene said: "I do not think that we can conquer his confidence with renewals. Sebastian has a contract with us, we work together this year and again next year, then during the next season we'll see.

"Each of us has goals," he added, "I have them, the team has them, Sebastian has them, we all have them. So it is only right that anyone, no matter who it is, earns their place and their salary."