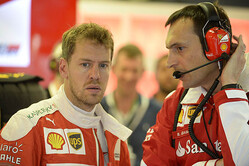 Sebastian Vettel has been handed a three-place grid penalty for the incident on the opening lap of the Malaysia Grand Prix.

The incident, which had similarities to the three-into-one clash on the opening lap of the Belgian Grand Prix, saw the German attempt to pass Max Verstappen on the inside of the first corner. The two touched and in the process Nico Rosberg was hit sending his Mercedes into a spin and dropping him to the back of the field.

Having reviewed the video evidence and spoken to Vettel, the stewards deemed that although the cars involved in the incident were all moving at relatively similar speeds, Vettel made a small error entering to the inside of turn 1 that led to the contact with Rosberg.

As a consequence, the Mercedes driver was caused to spin from second place and lose multiple positions, which the stewards determined was predominantly the fault of Vettel and therefore ordered the penalty for causing a collision.

Speaking after the incident, Vettel laid the blame firmly at the door of Verstappen, while sympathising with Rosberg who was blameless. In turn, the Dutch driver described Vettel's move as "crazy".

"He just dived up the inside, braked way too late, and t-boned Nico," said Verstappen. "I had to avoid the crash, so it compromised my race as well.

"I could see him behind me," he continued. "He wants to win the race in the first corner, which is, of course, ridiculous. I saw him in my mirrors, so I just braked late. I was closing up a bit on Nico, but he just dived up the inside. It was such a tight radius already, to try and turn and brake that late, of course you will lock up."

"If anything I was braking the same point as him," said Vettel. "I was going side-by-side, he was squeezing me down to the inside. It's racing.

"I thought both of us will make the corner, not a problem," he continued. "Obviously, Nico decided to take a different line, he's ahead, he's got nothing to do with it and doesn't have to bother what people are doing behind."

In addition to the grid penalty for Suzuka next week, Vettel receives 2 penalty points, bringing his tally for the 12 month period to 4.