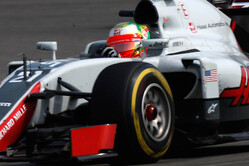 A thoroughly miserable weekend for Haas was compounded when the american team was fined for unsafely releasing Esteban Gutierrez following his second pit stop today.

With Romain Grosjean suffering a brake failure just 7 laps into the race, all hopes rested on the US team's Mexican driver who has yet to open his 2016 points account.

However, Gutierrez, who had pitted under the Virtual Safety Car which followed Lewis Hamilton's engine failure became another DNF when his left-front wheel parted company with his car.

Having reviewed the audio from the car, the available data and spoken to Gutierrez and his team, the stewards were satisfied that the Mexican did not know that he was driving the car in an unsafe condition. Indeed, it appears that a mechanical failure led to the wheel being able to be tightly fitted to the car while not actually attached correctly.

"An additional failure occurred in turn one under braking," stated the stewards subsequent report, "but the wheel was still retained in an abnormal way until it appears that the failure of the rim blew the wheel past the retention devices.

"Having spoken with the Technical Delegate, the stewards were satisfied that the retention devices operated within their required design limits. However, as some function of the design, part failure or fitting allowed the wheel to come loose on the track, which is considered a serious safety issue, the stewards determined that this led to the car being released in an unsafe condition."

In addition to a 5000 euro fine, the stewards ordered Haas to provide the Technical Delegate with a report on the failure and all corrective actions.

"We lost a wheel on Esteban’s car, but we’re not sure yet why," admitted team boss, Guenther Steiner. "The pit stop seemed to be ok and he got going. We need to see if a mechanical part failed or if it wasn’t tight, but we don’t know yet."