Another grid penalty for Alonso 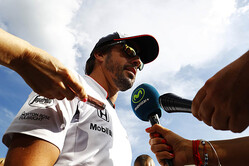 As Honda also tries new components for next year, the Spaniard will not use the new engine this weekend but will instead revert to the unit last used at spa.

Meanwhile, following yesterday's positive results, the Spaniard will continue with the latest, lighter exhaust, which will also be fitted to Jenson Button's car.

Acknowledging his grid penalty, Alonso yesterday admitted yesterday that he will post a token time in Q1 today in order to qualify, then watch the rest of the session on TV.