Alonso to watch qualifying on TV 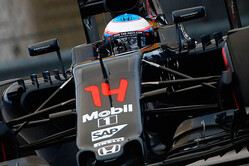 While he is already benefitting from Honda's latest upgrade, Fernando Alonso must pay a heavy price. The Spaniard, having taken on a number of new components outside his allowance has incurred a thirty-place grid penalty. Furthermore, with talk of another change tomorrow in a bid to add more units to his 'pool' the Spaniard will almost certainly incur a further hefty penalty.

Consequently, the two-time world champion admits that he will post a token time in Q1 tomorrow before heading off to watch the rest of the session on TV.

"Qualifying will be very short for me," he told reporters, "I'll do just one timed lap, to get within 107 percent of the pole time and then I'll watch the rest of the action on TV. That way I'll save as many new tyres as possible for the race to attack from start to finish."

While this time last year, the Spaniard's response to his ongoing struggles led to the 'places I would rather be' meme, this time around Alonso is feeling a lot more confident.

"Today was a good day," he said. "We managed to complete a good number of laps and do all the tests we had planned, including some parts for next year's car, so it was a very good day in that way."

Nonetheless, the Spaniard made it clear he would be delighted if, as predicted, the weather gods were to intervene this weekend.

"We are expecting rain, I don't know if it will come for qualifying or for the race, but whenever it comes it will help us," he said.