Vettel: It's not as bad as it looks 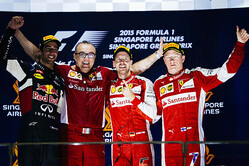 As Fernando Alonso reveals that a win with McLaren-Honda would be his sweetest win of all, surely someone, somewhere would be willing to wager on whether the Spaniard will achieve his particular dream before Sebastian Vettel achieves his.

This weekend's Singapore Grand Prix marks a year since the German last stood atop the podium, far less challenged for the title. Indeed, far from mounting a challenge to Mercedes for the 2016 title, Ferrari is hard pushed to hold on to Red Bull as the Austrian team looks forward to a couple of races which should favour it.

There's little that Vettel can tell Alonso about Ferrari, the Spaniard having endured five seasons at Maranello during which time he finished runner-up three times, and surely as the Italian team continues to lose ground to Mercedes, and now Red Bull, the two-time champ will allow himself a wry smile.

Nonetheless, Vettel insists that all is not lost, claiming that things are not as bad as the sceptics claim.

"I don't wake up worrying over how long it has been since my last win," he told reporters in Singapore. "When we started off last year it was clear where we wanted to go, to bring Ferrari back to the top.

"It's true we have not had a great season so far," he continued, "but I don't think it has been as bad as some people would lead you to believe. We are critical of ourselves because we have not achieved what we set out to achieve. We were closing the gap last year but unfortunately that gap to the top is still there, sometimes bigger, sometimes smaller but still there. We simply haven't been quick enough but we are always working on it."

Looking ahead to this weekend's race, a year on from that night of shocks when Mercedes seemingly fell apart and the Scuderia finished first and third, he said: "All the races that have passed this year we didn't record a victory but looking forward we are always aiming to win. This track was very good for us last year and we have improved the car from then so we should have a reasonable chance.

"You have to make Mercedes favourites," he admitted, "but they had a difficult time here last season. There's no guarantee that it happens again but if they do struggle, then everyone will be happy to take advantage."