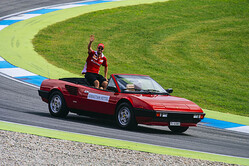 Fresh from 2017 tyre testing at Barcelona, and ahead of next week's race in Singapore, Sebastian Vettel will attend Ferrari Racing Days at Hockenheim this weekend.

he four-time world champion is the star attraction as he makes his second appearance at a Ferrari Racing Days event.

Weeks after Vettel finished fifth in the German Grand Prix there, fans will get to see their local hero - he's from Heppenheim, less than 50 km away - on Sunday when he will be at the wheel of an F2012.

Courtesy of F1 Clienti, there will be plenty of other Ferrari F1 cars present, ranging from a 312 B3 from 1974, in which Niki Lauda became famous and with which Clay Regazzoni nearly won the title, to the F150 Italia of 2011, two of which will be present, both driven in the World Championship by Fernando Alonso.

They cover a period of 37 years of Formula 1 history, and helping customers to fully enjoy their cars will be two experienced tutors: Olivier Beretta and Marc Gene.