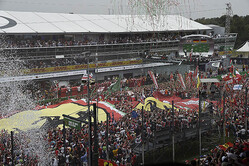 In the wake of James Allison's departure, Ferrari opted to follow the McLaren example and adopt a more horizontal structure to its technical departments.

The team's home race saw Ferrari under intense scrutiny, not just from the tifosi and the Italian media, but company president Sergio Marchionne.

Admitting that the team has missed its 2016 targets, Marchionne claimed he looked forward to 2017 with a lot more confidence, though somehow his words lacked conviction.

Able to breathe a sigh of relief having claimed a podium finish - its first in five races - in front of its adoring fans, Ferrari heads off to Singapore and beyond hoping to leapfrog Red Bull for the runner-up spot and then 2017.

In an interview with the official F1 website, Maurizio Arrivabene insists that things are now on a good path, but once again there is that lack of conviction.

Asked what Marchionne thought of what he witnessed at Monza, Arrivabene revealed: "He said that he sees the changes in the team. But of course things don’t come together overnight and a bit more patience is what is required.

"The structure of the team is good and solid," he continued. "There are enough people in Ferrari able to work at the top of the sport. But of course he is not happy with the results so far. He is really looking forward to next season.

"Of course we had hoped for more so far," he admitted, "and we’ve taken some action and my guess is that for the last races we should be on an upward trend. The spirit in the team is good and everybody is looking in the same direction. We will take every single race at a time. That is all we can do."

Asked about the conundrum that is deciding whether to try and challenge Red Bull or switch full focus to 2017, he said: "We are in Monza... and you see what is going on here. That massive support of the fans! If you work for a team like Ferrari you can’t give up. This is our DNA, but it is also pressure. So we will never give up on this season!

"Of course next year is important and we have a huge amount of focus on that, but it is the responsibility of each and every person in the team to do our best to be successful.

"We will never stop fighting - and we will do everything to find the right balance between what we want to achieve in 2016 and what in 2017."

Having won its last title in 2007, with Kimi Raikkonen, and had the likes of Fernando Alonso and Sebastian Vettel at its disposal, some might question whether Ferrari has already had more than enough time.